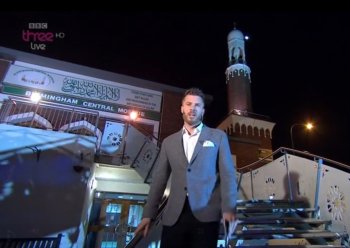 The BBC has controversially dropped a debate on homosexuality from a live panel discussion show because of objections from Birmingham Central Mosque in which the programme was being filmed.

As first reported by Breitbart London, the BBC Three live debate and discussion show aimed at young people, Free Speech, had intended to ask the question, "When will it be accepted to be Muslim and gay?" However, after showing a clip featuring Asifa Lahore, the UK's first Muslim drag queen discussing his multiple identities of Muslim, gay and British, the show's host, Rick Edwards, announced that the debate would not take place as planned. He told the audience:

"We were going to debate that question today, but after speaking to the Mosque, they have expressed deep concerns with having that discussion here."

The producers of the show, Mentorn Media – the makers of Question Time – say the debate will happen on its next show on 25 March.

Stephen Evans, campaigns manager at the National Secular Society said: "After agreeing to allow a programme called Free Speech to be filmed at the Mosque, it is absurd and counterproductive to then censor the topic being discussed.

"It is unfortunate that the BBC allowed itself to be censored on this occasion by reactionary imams, but this was a place of worship, and perhaps the BBC would do well to choose religiously neutral venues to hold such debates in future".

You can watch the show in full on the BBC iplayer. The censored question comes up at 35:45.