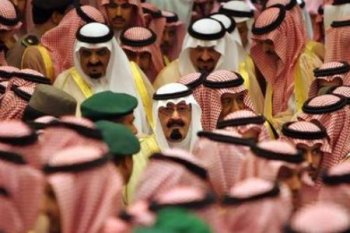 MEPs have called on Saudi Arabia to respect the freedom of religion and expression of all people living in the country. The European Parliament's Committee on Foreign Affairs voted in favour of a report, drafted by MEP Ana Maria Gomes, which calls for a progressive package of reforms regarding the human rights and civil liberties of Saudi citizens. The report notes that the changing political and strategic context of the Middle East and North Africa has necessitated a reassessment of the relationship between Saudi Arabia and the EU.

The call from the Committee has come just days after mutawa chief Sheikh Abdul Latif al-Sheikh was quoted in a Saudi newspaper as saying that he would "eliminate" religious extremists within his organisation's ranks who are "advocates of sedition".

Currently in Saudi Arabia, there is no freedom of belief or expression. Sharia law forms the basis of Saudi Arabia's legal system, and it allows no deviation from Sunni Islam, treating blasphemy as apostasy – an offence usually met with a death sentence. To aggravate matters further and increase the pressure on Saudis to adhere to the official government interpretation of Islam, the deep connection between the royal family and the religious establishment means that there is no separation between state and religion.

In February last year, the Grand Mufti of Saudi Arabia, Abdulaziz ibn Abdullah Al al-Sheikh said it is "necessary to destroy all the churches in the Arabian Peninsula", and in February 2012, Saudi King Abdullah ordered that Hamza Kashgari, a journalist who had posted messages on Twitter in which he imagined himself in conversation with the Prophet Mohammed, be arrested "for crossing red lines and denigrating religious beliefs in God and His Prophet". Kashgari spent nearly two years in jail, without trial.

In their report, MEPs called for the Saudi state to "respect the public worship of any faith and to foster moderation and tolerance of religious diversity". The report also calls for the abolishment of the death penalty (currently used against people found guilty of crimes which include drug offences, apostasy, sorcery and witchcraft), and for Saudi Arabia to "respect the fundamental rights of Shias and other minorities, including the right to full political participation".

The Committee urged reforms that would help women be treated more equally to men; deploring the fact that the legal system is "in the hands of male judges of religious background" and calling on Saudi Arabia to "to revoke the medieval male guardianship system, and to take further steps aimed at lifting restrictions on women's rights".

The report pulled up Saudi Arabia on its financial and political support for religious and political groups internationally who reinforce fundamentalist and obscurantist forces that undermine democratic governance and the participation of women in public life. It criticised Saudi Arabia's support for Salafi rebellion movements, which undermine governments in countries like Mali, and destabilise entire regions.

The European Parliament will vote on the report during its next plenary session in March.