French Islamists seek to use blasphemy law to silence critics 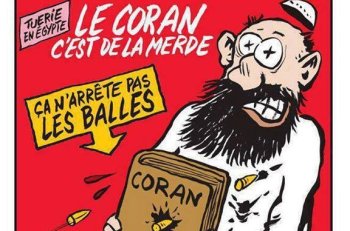 French Islamists are suing the satirical magazine Charlie Hebdo for blasphemy after it published a front cover carrying the slogan "The Koran is crap, it doesn't stop bullets".

Taking advantage of the existence of the crime of "blasphemy" uniquely available in the Alsace-Moselle region - it no longer exists in the rest of French common law – The League of Judicial Defence of Muslims (LDJM), led by the former lawyer Karim Achoui, has brought the case against Charlie Hebdo to the Criminal Court in Alsace-Moselle's capital, Strasbourg. The hearing is set for 7 April.

Alsace-Moselle was annexed by Germany in 1871 and 1940-45 and retained part of the old German code when it returned to France.

One complication is that the Alsatian blasphemy law does not recognise Islam, covering only Catholicism, three forms of Protestantism and Judaism. This test case will decide whether the law can be widened to include Islam.

In the rest of France the crime of blasphemy has not existed since the Revolution. It was removed from the French law by Articles 10 and 11 of the Declaration of Human Rights and the Citizen of 1789, before being reinstated under the Restoration and again permanently deleted by the law of 29 July 1881 on freedom of the press. From the point of view of French common law, a caricature, even one perceived as 'disrespectful', cannot be blasphemous.

But France does have racial and religious hatred laws that are intended to protect only individuals. French courts will consider cases that cause "injury, personal and direct attack against a group of people because of their religious affiliation" or incitement to racial or religious hatred in cases involving defamation of individuals. "The distinction may seem subtle, but it is fundamental, it is the citizen that the republic protects, not belief" says Hubert Lesaffre, doctor of public law, in an article published by Liberation newspaper.

Undeterred by the absence of a blasphemy law in the rest of France, the LDJM is also trying to prosecute Charlie Hebdo in a Paris court for "provocation and incitement to hatred on the basis of religious affiliation and insult". The Tribunal of First Instance in Paris will decide whether the case can proceed.

Article 166 of the Alsace -Moselle penal code - inherited from the German legislation - relating to blasphemy states:

"He who causes a scandal by publicly blaspheming against God by disparaging or publicly insulting Christian cults or a religious community established in the territory of the Confederation and recognised as a corporation, or institutions or ceremonies of these cults or which, in a church or other place devoted to religious meetings, has committed offensive and outrageous acts, shall be punished with imprisonment of three years".

Eric Sander, Secretary General of the Institute of Alsace-Moselle, told Le Monde newspaper that local law states that "any religion, statutory or otherwise, can invoke Article 166 of the local penal code which is independent of system of worship".

Asked in 2006 about whether the provisions of local Alsatian law "apply to all religious beliefs or only to legally recognised religions", the Ministry of the Interior had stated that "the implementation and determination of the scope application of [Article 166], in particular as regards the extension to non- recognised religions... is at the discretion of the judge".

The last case brought under this law was in 1918.

Another hearing has also been set for the 7 April, this time in the southern town of Nîmes, in a case against former decentralisation minister Claude Goasguen. He has been accused of "offending the honour and dignity of the Muslim community", in the words of lawyer Khadija Aoudia, acting for one of France's two major Muslim associations, the CFCM.

Mr Goasguen, speaking at a gala organised by a pro-Israel group, KKL, claimed that the history of the Holocaust could no longer be taught in French schools "because people are so scared of the reaction of young Muslims who have been drugged in the mosques".

Although the event took place in Paris, it was broadcast on television and the internet, thus allowing the CFCM's Abdallah Zekri to bring the case in Nîmes where he lives.

Claiming that the "Muslim community" is "always ready to denounce anti-Semitic acts", Aoudia said that media coverage of Goasguen's remarks "feed Islamophobia and create a strong feeling of rejection".

However, at a recent "Day of Rage" demonstration in Paris –which brought together Catholic fundamentalists, far-right groups and supporters of comedian Dieudonné, some of whom are young Muslims – anti-Semitic slogans were chanted.

In yet another case, Minister of the Interior Manuel Valls is targeted. A petition has been filed with the Court of Justice of the Republic for "provocation to discrimination and hatred". The complaint is in response to remarks made by the Minister 19 August 2013 in which he said "within the next ten years, we need to demonstrate that Islam is compatible with democracy".