Vatican challenged by UN over its handling of child abuse 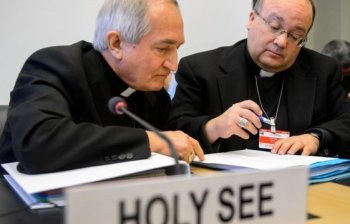 Representatives from the Vatican have faced tough questions over the Holy See's record on sexual abuse and other forms of violence against children by a UN Committee on the Rights of the Child (CRC) in Geneva.

The Holy See was questioned over its failure to comply with the Convention on Rights of the Child, and faced allegations that many more children had been abused because the Church had protected paedophile priests at the expense of victims.

A common theme of questioning was the disparity between what the Catholic Church says in public and what it actually does to combat child abuse within its ranks.

One Committee member said it was "difficult to continue listening" to the Holy See representatives when no concrete actions were being taken by the Holy See to adequately respond to the needs of victims.

One of the UN committee's special rapporteurs, Sara De Jesus Oviedo Fierro, demanded that the Vatican provide details on abuse cases and on the counter-measures taken, as had been demanded previously by the UN body.

However, in its responses to the UN Committee's questions, the Holy See attempted to evade responsibility and accountability for the widespread abuse of children and subsequent cover-ups by insisting that the Holy See was "separate and distinct" from the Roman Catholic Church – and that its jurisdiction is only over the territory of the Vatican City State (where only 36 children live).

Bishop Charles Scicluna, the Vatican's former chief prosecutor of clerical sexual abuse, insisted that it was "not the policy of the Holy See to encourage cover-ups". However, when directly challenged over an example where the Vatican congratulated a Bishop for refusing to inform police about a paedophile priest despite an admission of guilt (raised with the committee in a submission by the NSS), Bishop Scicluna replied: "The Holy See gets it, let's not say too late... There are certainly things that need to be done differently".

When quizzed over the lack of compensation paid to victims of abuse, the Vatican representative insisted that the individual causing the damage was responsible, rather than the Church. One Committee member suggested the Church should consider setting up a compensation scheme to compensate victims of priests employed by the Church, but the Vatican said it would need to take advice on this before responding.

Whilst Vatican officials repeatedly emphasised the need for better training and education of priests, they failed to adequately answer concerns about justice for victims, or offer full disclosure of crimes committed in the past. Bishop Scicluna did, however, concede to the Committee that the Holy See's "nice words" would not mean anything without greater transparency and accountability in its next report to the Committee.

Barbara Blaine, president of SNAP, a group representing US victims of abuse by priests, told BBC News that the hearing had brought "hope to victims across the globe".

But it would also stand, she said, as a "record of how the Church officials refused to answer the questions, how they claim to be open and transparent, and yet they don't live up to that ideal".

Keith Porteous Wood, National Secular Society executive director, praised the UN Committee for holding the Vatican to account for its responsibilities under the Convention to act in the best interests of children.

Mr Wood said: "The Holy See tried hard to give the impression that it had changed its policy on the need to report abusers to civil authorities. Nevertheless, it conspicuously employed an armoury of diversions to evade repeated requests for instructions to be issued by the Vatican for mandatory reporting of credible accusations to civil authorities by the Church worldwide. It also sidestepped requests to release a database of the accusations they require the worldwide church to report to the Vatican.

"The Holy See continually emphasised the importance of pastoral support for victims, but we have never seen evidence anywhere in the world of the support they describe, but much evidence of every possible tactic being employed to frustrate this" he said.

Mr Wood added that he hoped the public examination and resulting media coverage would cause the Vatican to reflect on whether it should be more open and honour its obligations under the Convention.

The Committee was examining a five yearly report – mandatory under the Convention – submitted over ten years late by the Vatican. The eventual filing of that report followed interventions about its non-filing at the plenary sessions of the UN Human Rights Council 2009-2011 by Keith Porteous Wood (under the auspices of the International Humanist and Ethical Union).

Last year, on the basis of an earlier written submission, the National Secular Society was invited, together with a number of organisations representing victims, to be cross-examined during a private session with the Committee in preparation for this public examination.

The Committee will deliver its observations and non-binding recommendations on 5 February.