Tickets on sale now for Secularist of the Year 2014 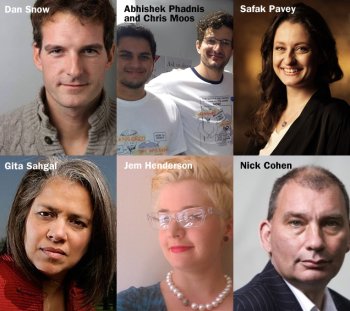 The shortlist has been announced for this year's Irwin Prize for Secularist of the Year.

The award is presented annually in recognition of an individual or an organisation considered to have made an outstanding contribution to the secular cause.

Nominations for Secularist of the Year are made by members and supporters of the National Secular Society; the shortlist and eventual winner is chosen by the NSS Council – along with Dr Michael Irwin, the sponsor of the award.

This year's prize will be presented by Shadow Minister for Foreign and Commonwealth Affairs, Kerry McCarthy MP, at a lunchtime event in central London on Saturday 29 March.

This year's shortlist for the award is as follows:

Nick Cohen – for his eloquent and passionate defence of free speech and for consistently standing up for secularist principles in the media. An example of which can be found here.

Jem Henderson ­ – for standing up for the rights of all Girlguides, to take the new secular oath after guide leaders refused to drop God from the promise. One person who nominated Jem described her as "an inspiration" and praised her "tremendous courage and integrity" when opposed in the media by powerful public figures and organisations.

Safak Pavey, member of the Turkish Parliament – for consistently standing up in defence of secularism in Turkey as the Islamist-leaning Government tries to dismantle it. In 2012, she was awarded the International Women of Courage Award by the US Department of State. You can read a piece by Safak on secularism here.

Abhishek Phadnis and Chris Moos (jointly) – for bravely challenging Islamist groups, their own university (LSE) and Universities UK over important and fundamental issues such as free speech and gender segregation.

Gita Sahgal – for her advocacy of secularism and tireless activism against fundamentalism, blasphemy laws, restrictions on free speech and violence against women. Gita was co-founder of Southall Black Sisters and Women Against Fundamentalism and more recently founded Centre for Secular Space.

Dan Snow – for promoting a secular vision for the national ceremony of remembrance and challenging the Church of England's dominant role at the Cenotaph.

Terry Sanderson, President of the National Secular Society, commented: "This year we have a remarkable list of nominees, all of them deserving of the £5,000 Irwin Prize. This year's occasion looks set to be a real celebration of freedom, fairness and human rights – all of which are impossible without secularism".

Tickets for this year's lunchtime event are available online, priced at £45. This includes a welcome 'Jesus & Mojito' cocktail and a three-course meal with tea and coffee.

Tickets can also be purchased from the NSS office by making a cheque payable to 'National Secular Society' and sending it to NSS, 25 Red Lion Square, London WC1R 4RL – and please remember to indicate whether you have any special dietary requirements.