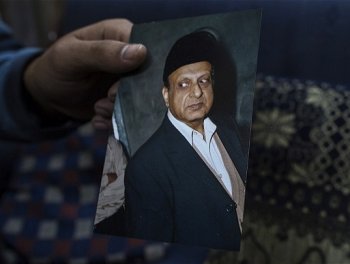 A UK-based human rights organisation is calling on the authorities in Pakistan to release a 72-year-old doctor who was arrested for 'posing as a Muslim' after being secretly filmed by a patient at his surgery.

Global Minorities Alliance, a Glasgow-based human rights organisation that advocates for the rights of minority communities the world over, denounced the imprisonment as a further example of Pakistan's strict blasphemy laws being used to persecute minorities and whip up religious hatred rather than seek justice in a country that is increasingly being divided by violence.

Mr Masood Ahmad, a member of the Ahmadiyya community, was charged under Pakistan's anti-Ahmadiyya blasphemy legislation after a religious leader posing as a patient attended his homeopathy clinic in Lahore and secretly recorded him reading a verse from the Quran.

Mr Ahmad, who has dual Pakistani/UK nationality and previously lived in London, was arrested shortly after and is now in prison awaiting trial. He has been refused bail and there have been calls from the angry mobs that gathered outside the courthouse for him to face the death penalty.

"In the past the police and the courts generally did not accept such accusations where the accuser had himself approached an Ahmadi at his home or job to discuss faith matters" said a spokesperson for the Ahmadiyya community in Pakistan. "It is noteworthy that while the political leadership repeatedly condemns sectarianism and extremism in public, it encourages its law officers to upgrade and intensify religious prosecution of Ahmadis".

Ahmadis belong to the minority Ahmadiyya sect, which has the Quran as their holy book but believes that there was a Prophet after Muhammad. In 1984 they were declared 'non-Muslims' under Pakistani law. The Pakistan Penal Code 298- C states:

"An Ahmadi who refers to his faith as Islam, or preaches or propagates his faith, or invites others to accept his faith, by words, either spoken or written, or by visible representations, or in any manner whatsoever outrages the religious feelings of Muslims will be punished with up to three years in prison and is liable to pay a fine."

Laws like this leave Ahmadis at frequent risk of persecution, as accusations of blasphemy are often levelled in situations where there are personal grudges to be settled or where religious extremists have previously preached against the community; for example, some hard-line Mullahs claim that killing an Ahmadi would earn someone a place in heaven.

"My father has not made any mistakes or acted against the law. Anyone can listen to or read the Quran. He has never done anything wrong.

"We urge the Pakistan government to release my father so that he can be reunited with his family. I have been born and brought up in Pakistan and we believe the anti-Ahmadi laws are being misused by the public. Ahmadis are given less protection and such laws should be abolished".

"We call on the Pakistan government to better protect its minorities to stop people like Mr Ahmad from being imprisoned over very trivial matters.

"We also demand that the government repeal anti-Ahmadiyya legislation. People are having their livelihoods destroyed and their families left devastated, all because they said the wrong thing to the wrong person and live in a country governed by laws which are used to persecute rather than prosecute. In this case it was even a private conversation which Mr Ahmad did not realise was being recorded, and one where he was encouraged to discuss religion by someone who was deliberately trying to entrap him.

"The government of Pakistan deliberately looks the other way while more and more people from the various minority communities are imprisoned for blasphemy. This is discrimination rather than justice and should stop before more violent acts are committed against minorities in the name of protecting the majority".

"Dr Masood Ahmad is yet another victim of the infamous blasphemy laws, which specifically target and infringe on the basic human rights of Ahmadi Muslims and are a root cause of extremism and violence in Pakistan today. The international community needs to take collective action to bring an end to this state sponsored persecution of Ahmadi Muslims".

Abdul Abid, President of the Ahmadiyya Community in Scotland, agrees:

"It is not the fault of extremists who are using the law. It is the fault of the state that these laws were introduced on the demand of extreme members of the clergy, thus the government encouraged extremism and is now paying the price as the situation is out of control".

Pakistan's blasphemy laws do not only disadvantage Ahmadis, however. Last year, two bomb blasts in a Peshawar church left more than 60 dead and more than 100 injured. The church had previously received bomb threats but the authorities did not follow up on them, meaning the minority Christian community was not protected. In the aftermath of the attacks, Christians were arrested on blasphemy charges for protesting.

"This shows what can happen if the persecution of a minority community is allowed to continue unchecked," said Mr Khan. "Mr Ahmad may be one case but that is just the tip of the iceberg; around 20 Ahmadis were murdered in 2012 for their faith, and if the Pakistan authorities continue to do nothing then this will only escalate".

This article originally appeared in Pakistan Christian Post and is reproduced with kind permission.