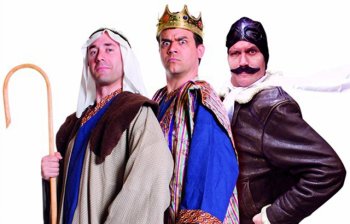 Newtownabbey Borough Council in Northern Ireland has overturned its ban on a play that spoofs the Bible.

The Council's Arts Committee had originally cancelled two performances of The Bible: The Complete Word Of God (Abridged) at the council-owned Mill Theatre. But after an international outcry that brought condemnation from the likes of Amnesty International, Tim Minchin and Richard Dawkins, the Arts Committee has now reversed its ban. The decision was upheld by the full council at an acrimonious meeting on Monday.

DUP members of the council had branded the play "blasphemous" and an attack on Christianity, but the decision caused outrage to supporters of free expression and made international headlines.

When a supporter of the National Secular Society wrote in protest to one of the councillors behind the ban, DUP member Billy Ball, he received this message in response:

"Thank you for your email but when did I say I wanted to censor the arts? I stated my opposition to this play on its mockery of God's word. Last week in [the] European Parliament they highlighted 50 countries that persecute Christians if caught in possession of scriptures. [Christians] are either imprisoned or put to death. The word of god is not a book. It is THE book, our guide to everyday living [and] a comfort in times of trouble. I know you will not agree with me that's up to you. I as a Christian bear no malice for anyone. Yours in Christ, Billy Ball."

However, another DUP councillor, Alderman Dineen Walker, refused to support the ban and told the Belfast Telegraph it was not the job of councillors to censor art.

The Reduced Shakespeare Company, the company which is to perform the play, said they were "thrilled Newtownabbey audiences can now see what all the fuss was about." They said the publicity had resulted in several other dates on their tour selling out and their twitter following had increased to over 10,000.