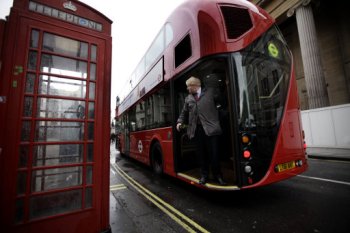 The Christian Legal Centre and an organisation called Core Issues Trust, which claims to offer curative "therapy" for homosexuals, are claiming that a Court of Appeal decision today over the banning of an advertisement on London buses is "an important victory" – even though the ban remains in place for the time being.

The poster, which was to appear on the side of buses, read: "Not Gay! Ex-Gay, Post-Gay and Proud. Get over it!" It was supposed to be a response to the ads posted by Stonewall which read "Some people are gay – get over it".

The Christian fundamentalists argued in court that the mayor of London, Boris Johnson, had illegally used his position as chairman of Transport for London (TfL) to ban the Christian advert in order to garner gay votes for his 2012 election campaign.

The High Court rejected these claims, but today the Court of Appeal said there should be further investigation to reconsider whether the Mayor had acted "for an improper purpose" in calling for the ban.

Mayor Johnson had argued that the Core Issues advert was ''offensive to gays'' and could lead to retaliation against the wider Christian community.

His office welcomed the ruling, saying: "The Mayor is pleased TfL's original decision to ban the Core Issues Trust advert has been upheld by the Court of Appeal. He agreed with TfL's ban at the time and will continue to support the banning of adverts that breach advertising policy and cause widespread public offence, as this advert clearly did".

Andrea Minichiello Williams, of the Christian Legal Centre, said: "In a mature democracy both sides of a debate should be heard but it seems that Boris Johnson, Transport for London and Stonewall are intent to shut down the Christian side of the debate by fair means or foul".

The Master of the Rolls, Lord Dyson, sitting with Lord Justice Briggs and Lord Justice Christopher Clarke, declared: "It is not possible to reach a conclusion on the question whether TfL's decision not to allow the Trust's advertisement was unlawful on the grounds that it was instructed by the mayor or made for an improper purpose.

"I would, therefore, remit the case for the judge (Mrs Justice Lang) to reconsider this question in the light of fresh evidence and in the light of any further material that emerges as a result of the directions that she may give".

Lord Dyson said that if after reconsideration "the judge decides that the decision was not instructed by the mayor and not made for an improper purpose, then her decision [upholding the ban] will stand".

However, if the judge decides that the decision was instructed by the mayor or made for an improper purpose, "then the decision must be quashed."

Dr Mike Davidson, who leads The Core Issues Trust, said he would write to the mayor to ask for all emails linked to the ban, "current and potentially deleted", to be made available to his lawyers.