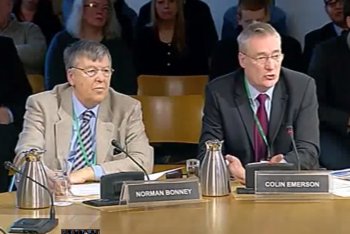 Edinburgh Secular Society (ESS) has presented its case for the removal of unelected religious representatives on local authority education committees to the Scottish Government's Petitions Committee.

ESS lodged the Holyrood petition last year, seeking to repeal this iniquitous aspect of local government law whilst pointing to recent Scottish census results, which show nearly half of Scots say they have no religious belief.

Their campaign received an unexpected and welcome boost when John Finnie MSP submitted a Private Member's Bill in the Scottish Parliament also seeking to abolish this outdated privilege. Highlands and Islands MSP Mr Finnie, who quit the Scottish National Party last year after a row over NATO membership post-independence, said his bill would make local government more accountable and transparent to the electorate.

Both the ESS petition and John Finnie's bill have drawn fierce opposition from the churches, anxious to retain historic privileges in an increasingly secular Scotland. This particular privilege dates back to 1872 when responsibility for schools was taken by the state from churches and others, such as private benefactors and philanthropic societies, but as part of this deal the churches were still granted a say in the education system by having right to appoint these representatives.

Defending the privilege, a Church of Scotland spokesperson referred to the Church's centuries-old vision of a school in every parish, which helped in establishing Scotland's universal education system.

Alistair McBay, NSS spokesperson for Scotland, commented: "The reality is that when the churches handed over control of schools to the Government in 1872, it was because the system was in disarray. Much of the school inspection regime was denominational, with more time spent testing orthodoxy than efficiency and achievement, while the schism in the national church produced wasteful duplication of effort in many areas. Free Church and established Kirk schools competed for pupils, while in many burghs there was conflict between church and municipality for control of the burgh school.

"The current position, whereby religious representatives are appointed to all 32 local authority education committees in Scotland, is untenable in a democratic society. These individuals are not elected, but have full voting rights and are merely nominated by their respective religious organisations. They are accountable only to their respective religious organisations and cannot be voted out by the public".

The ESS presentation stated that the reform would enhance local accountability by removing a privilege that is inherently and profoundly undemocratic. During research for the petition, the ESS discovered that despite the Church of Scotland's claim that its representatives were impartial on local authority education committees, its Church and Society Council reported to the General Assembly that it estimated Church Representatives held the balance of power on 19 local authority education committees.

During the petitions hearing, one MSP remarked he was aware in some local authorities that the churches had "exerted undue influence over decisions made in education committees", particularly in the case of joint campus proposals involving Catholic and non-denominational schools. These are experiments to tackle Scotland's sectarian school system but have been the subject of some controversy, with the Scottish Catholic Church demanding that such schools have separate entrances, separate staffrooms and even separate staff or 'denominational' toilets as essential components in preserving the 'ethos' of Catholic schools.

Mr McBay commented: "If this MSP is correct in his assertion, it demonstrates that an active sectarianism is not the sole province of football supporters in Glasgow but practised by the churches themselves in local government committees, and in relation to the education of Scotland's children".

Commenting on the petition, Colin Emerson, ESS Vice-chair said: "To afford a particular section of society a privileged position within the decision making process of local government, based solely on their particular and personal religious beliefs, is profoundly and inherently undemocratic, unfair and discriminatory. It strikes against those specific virtues of justice and integrity underpinning our society and which lie at the heart of the Scottish Parliament".

The next stage of the Petitions process involves consultation with a range of faith groups and local authority oversight groups.