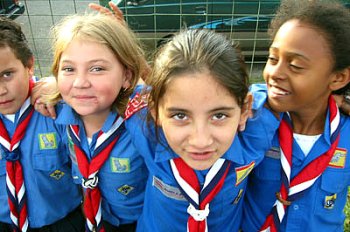 The Girlguides Movement is under heavy pressure from the Church of England to scrap its recently introduced secular promise and "re-instate God".

A motion has been put forward for debate at the next Church of England General Synod to be held in February. The motion – from conservative Christian Alison Ruoff – reads: "That this Synod believe that girls of all ages in the Girlguiding Movement should not suffer discrimination but be able to continue to promise to love God when enrolled rather than making a wholly secular promise".

In a briefing paper Ms Ruoff says, it "cannot be right" for Guide units which meet in church premises to be banned from being able to say "I love my God" in the promise. More than 120 other Synod members have signed in support of the motion.

Meanwhile, a Guide troop in Jesmond near Newcastle, has said that it will not embrace the new promise and has been warned by the Girlguide headquarters that it risks being expelled from the movement. It was given until 19 January to make the change, but its leaders were adamant that they would stick with the old religious oath whatever the consequences.

It is not clear whether the Girlguide Movement has yet carried out its threat and expelled the group.

Chief Guide Gill Slocombe said: "Girl Guiding is extremely sorry to hear of any Guide group leaving our organisation. By changing the wording of our promise, after an extensive consultation with over 44,000 people, we have opened our arms to welcome even more girls and adults – of all faiths and none ­– who will benefit from all the fantastic things we do in guiding".

Another Guide troop in Harrogate, Yorkshire also said last year that they would not use the new oath but eventually backed down after Jem Henderson, a volunteer with the group, who is an atheist, complained to the National Secular Society about the troop leadership's stance, accusing them of discriminating against non-believers.

Terry Sanderson, President of the National Secular Society, commented: "The Church of England's bullying over this does it no credit. The Guides are not a religious organisation and the Church has no business interfering in their internal decision-making. The Church would be the first to protest if anyone tried to tell it how to organise itself.

"The fact that Guide groups meet in church halls does not mean they belong to the Church. My local amateur symphony orchestra also performs in the local church, but I doubt if they'd tolerate a demand that they pray before performances. They'd soon find somewhere else to perform. Using Church halls – which the CofE assures us are a resource for the whole community – as a blackmail tool is reprehensible.

"The Church should get its boot off the Guides and leave them to organise in the way that their members want".