5.3 billion suffer restrictions on religious freedom around the world 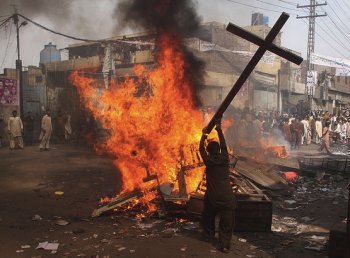 As national religious freedom day is celebrated in the United States, a report by the Pew Research Center reveals violence and discrimination against religious groups by rival faiths and governments have reached a six-year high worldwide. In its report on religious restrictions around the world, the Pew Research Center shows that, in 2012, 5.3 billion people (74% of the world's population) experienced high levels of restrictions on their religious freedom (this compared to 52% in 2011).

Whilst the greatest levels of social hostilities toward religion were felt in Afghanistan, India, Iraq, Israel, Pakistan, and Somalia, an increase in hostilities in China was what was understood to have caused such a sharp increase overall for 2012, where the level of religious strife was categorised a "high" for the first time in the survey's six-year history. In 2012, China experienced an increase in sectarian conflict, religion-related terrorism and mob violence.

The study reveals that abuse targeting religious minorities occurs in nearly half of the world's countries, and that that in 39% of countries there was an increase in violence, or the threat of violence, used to compel people to adhere to religious norms. This compares to 33% in 2011 and 18% in 2007.

Intensified violence in Buddhist-majority Sri Lanka against Muslims and Christians and in Muslim-majority Egypt against Coptic Orthodox Christians was noted by the report, as was terrorist-related violence such as the March 2012 shooting at a Jewish school in France, by an Islamic extremist.

Some of the greatest increases in hostilities against those of religious belief were seen Afghanistan, Lebanon, Libya, Mali, Mexico, Syria and Tunisia. In only seven countries, was a significant improvement seen, those included Cambodia, Cyprus and Ethiopia.

The study shows that harassment against Christians occurred in 110 countries, against Muslims in 109 and against Jews in 71. The harassment of Hindus, Buddhists, and members of other smaller religious groups (which includes atheists) also increased. Whilst Sikhs and Baha'is experienced government restrictions more than social harassment, the opposite was the case for Jewish people.

Whilst showing a rise in socially restrictive forces on religious freedom, the study finds that governmental restrictions on religion remained relatively unchanged between 2011 and 2012. 64% of the world's population lives under severe legal and political conditions when it comes to religious freedom; these include limitations on preaching, banning conversions, or privileging some or one religious group over others. In nearly half of the world's countries, states were shown to have used force against religious groups. Those countries imposing the strictest government restrictions, included Afghanistan, China, Egypt, Indonesia, Iran, the Maldives, Saudi Arabia, and Syria.

The regions of the Middle East and North Africa continue to have the highest median level of government restrictions. Nine out of ten of the most restrictive countries for religious freedom in terms of state policy were Muslim-majority states.

This report comes a month after the publication of the International Humanist and Ethical Union's 2013 Freedom of Thought report, which revealed that the non-religious also suffer severe discrimination and restrictions on freedom because of their beliefs. It found that non-believers are discriminated against, or outright persecuted, in most countries of the world. It noted 12 states in the world in which a person can face the death penalty for being an atheist, and 39 in which the law mandates a prison sentence for blasphemy, including six western countries.