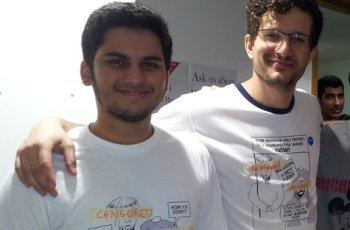 The London School of Economics (LSE) has apologised to two students who were forced to cover up t-shirts featuring pictures from the satirical comic strip Jesus and Mo.

Chris Moos and Abhishek Phadnis were running the Atheist Secularist and Humanist Society stall on 3 October when they were told they would be physically removed from the annual Freshers' Fair unless they covered up the 'offensive' t-shirts.

The incident sparked a national debate over free expression, and the extent to which universities are pandering to the sensibilities of Islamic extremists on campus.

After instructing solicitors, the two students lodged an official complaint to LSE on 12 November.

Director of the School, Professor Craig Calhoun, has now written to the students acknowledging that, with hindsight, the wearing of the t-shirts on this occasion did not amount to harassment or contravene the law or LSE policies.

A statement issued on the LSE website, said: "LSE takes its duty to promote free speech very seriously, and as such, will discuss and learn from the issues raised by recent events."

The apology has been welcomed by the National Secular Society, which has been actively supporting the students with their appeal.

Terry Sanderson, NSS president, said: "We congratulate students for their fearless defence of freedom of expression. This is a welcome apology from LSE, and it should be congratulated for making it publicly, whether or not the threat of legal action played any role.

"I hope that we will now see a more sensible approach to free expression that does not rest on protecting the sensibilities of any one particular group.

"We all have to learn that being offended is an inevitable part of life, having one's fondest beliefs challenged is part of a free society. Let's hope that lessons have been learned and we don't have any repeat of this. Then we can move on to a more mature and open debate about all kinds of things – including religion."

Chris Moos and Abhishek Phadnis also welcomed what they described as the "half-apology" from the LSE.

"We welcome the LSE's admission that its staff misjudged the situation, and their acknowledgement that we were well within our rights to wear 'Jesus & Mo' t-shirts on campus and that this neither amounted to harassment nor contravened the law or LSE policies.

"Even though it caused us great distress to be publicly harassed and humiliated by LSE and LSE Students' Union (LSESU) staff, LSE's response vindicates our decision to stand up for our rights.

In a joint statement, Chris Moos and Abhishek Phadnis added: "Even as we welcome Professor Calhoun's apology, we are disappointed that it took the threat of legal action to elicit an acknowledgement of our grievances, and that no apology has been forthcoming from the LSESU, whose grave misconduct began this chain of harassment. We also believe that several other lingering concerns must be put on record."