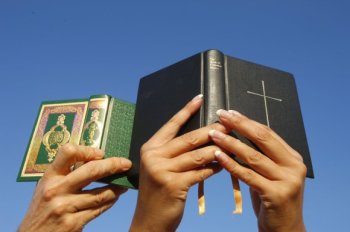 Religious fundamentalism is not a marginal phenomenon in Western Europe, nor is it restricted to Islam. This conclusion is drawn in a large-scale study published by Ruud Koopmans from the WZB Berlin Social Science Center.

The study is the first that allows analysis on an empirical base of the extent and impact of religious fundamentalism.

Two thirds of Muslims interviewed said that religious rules are more important to them than the laws of the country in which they live. Three quarters of the respondents held the opinion that there is only one legitimate interpretation of the Koran.

These numbers are significantly higher than those from local Christians: only 13% of this group placed religious rules above national law; just under 20% refused to accept differing interpretations of the Bible.

Almost 60% of the Muslim respondents rejected homosexuals as friends; 45% thought that Jews cannot be trusted; and an equally large group believed that the West is out to destroy Islam. The Christians' answers for comparison: As many as 9% were openly anti-Semitic; 13% did not want to have homosexuals as friends; and 23% thought that Muslims aim to destroy Western culture.

A critical analysis of the findings by Cas Mudde, assistant professor in the School for Public and International Affairs at the University of Georgia appeared in the Washington Post.

She notes that the Koopman's report finds that young Muslims — most of whom are not immigrants, but were born in Western Europe — are as fundamentalist as older Muslims. Ms Mudde said: "This finding goes against the received wisdom that 'immigrants' have assimilated by the third generation; a process that used to hold up for most of the 20th century, but seems to have changed in the current interconnected world. That said, recent research on French immigrants showed that the fourth generation (which they call '2.5 generation') is much more integrated than the third."

Fundamentalism and out-group hostility – Muslim immigrants and Christian natives in Western Europe by Ruud Koopmans can be read in full here (PDF).