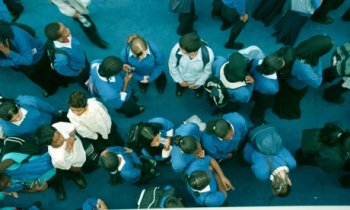 New research published by the Fair Admissions Campaign has highlighted the extent to which faith-based admissions policies create socio-economic segregation.

Campaigners say the findings reveal a "clear correlation" between the degree of religious selection and how socio-economically exclusive schools are. According to the figures, non-religiously selective Church of England comprehensives admitted 4% more pupils eligible for free school meals than would be expected compared to their area. In contrast, Church of England schools whose admission criteria allowed for full selection on religious grounds admitted 31% fewer children on free school meals.

Chairman of the Accord coalition for inclusive education Rabbi Dr Jonathan Romain said that the data poses some "very awkward questions" for the state-funded faith school sector.

"This new research exposes the hypocrisy of those who claim religiously selective schools serve the community at large", he said.

"It reveals that they not only further segregate children on religious and ethnic grounds, but also are skewed towards serving the affluent at the expense of the deprived."

Last month, Archbishop of Canterbury Justin Welby issued a statement saying he fully supported current policy for Church of England schools to set their own admissions criteria, including that of faith.

Stephen Evans, campaigns manager at the National Secular Society, said: "School admissions policies that discriminate on religious grounds are not only unfair, they also encourage socio-economic segregation and impede community cohesion. The time has come to end the exemptions from equality legislation that permits publicly-funded schools to select or turn away pupils on the basis of their parents' religious beliefs.

"Rather than acquiescing to demands from parents and faith groups to divide children along religious lines, we need an inclusive education system that values and caters for all pupils equally, regardless of religion or belief. The very concept of faith schools undermines the foundations of fairness, mutual respect and understanding that is so essential to the future of a pluralistic Britain."

Map of English secondary schools by religious and socio-economic selection