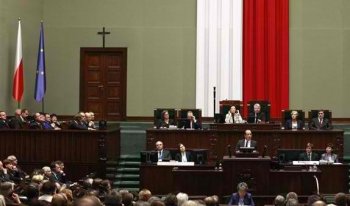 An MP in Poland has lost a court challenge to the presence of a large crucifix in the country's parliament building.

The crucifix was placed, without consultation, in the session's hall of the parliament in the middle of one night in 1997 by a Catholic MP.

Now members of the small Your Movement party asked that it be removed, but the appeals court on Monday rejected the challenge.

Judge Edyta Jefimko ruled on Monday at the Warsaw court that the crucifix is not just a religious symbol, but also one of "culture and natural identity" in the predominantly Catholic country.

Poland's Prime Minister Donald Tusk said he welcomed the verdict and commented that the debate over separation of church and state — which is gathering momentum in Poland — should not be expressed through "fights over whether the cross should be put up or not."

A secular opposition party, the Palikot Movement has also made attempts to have the cross removed.

In 2010 a large cross was placed outside the presidential palace and became the focus of much controversy and division. It was quietly removed to the president's chapel to stop demonstrations by secularists.

Opponents have now vowed to take the case of the parliamentary crucifix to the European Court of Human Rights in Strasbourg, claiming that their rights as non-believers are being breached.