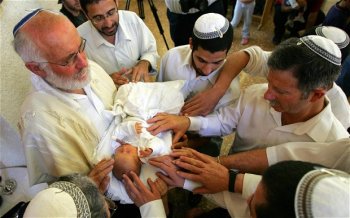 According to a report in the Times of Israel, the Council of Europe is to revisit last October's resolution which stated that the ritual circumcision of young boys violates their basic human rights.

The decision comes after an Israeli delegation met members of the Council in Paris to argue the case against banning religious circumcision. The matter is scheduled to be debated at a full meeting of the Council in January 2014.

The announcement came after an Israeli delegation led by MK Reuven Rivlin met with members of the council in Paris to argue the case against banning religious circumcision, Israel Radio reported on Tuesday. The matter is scheduled to be debated at a full council meeting next month.

Leader of the delegation, MK Rivlin, speculated that he thought the Council would "change its position".

The Parliamentary Assembly of the Council of Europe passed a resolution that called male ritual circumcision a "violation of the physical integrity of children" by a vote of 78 to 13, with 15 abstentions in October. The decision was based on a report from the Committee on Social Affairs, Health and Sustainable Development led by German rapporteur Marlene Rupprecht.

The resolution also urged member states to "initiate a public debate, including intercultural and inter-religious dialogue, aimed at reaching a large consensus on the rights of children to protection against violations of their physical integrity according to human rights standards" and to "adopt specific legal provisions to ensure that certain operations and practices will not be carried out before a child is old enough to be consulted."

Practices covered by the resolution included female genital mutilation, the circumcision of young boys for religious reasons, early childhood medical interventions in the case of intersexual children, corporal punishment, and the submission to or coercion of children into piercings, tattoos or plastic surgery.

In November, Israel's Deputy Minister of Religious Services Eli Ben Dahan (Jewish Home party) met with the secretary general of the Council of Europe to urge protection of "religious freedoms", and prevent restrictions on ritual circumcision and animal slaughter.

Slaughter without prior stunning was made illegal in Poland as of January, following a ruling in November by the constitutional court on a petition by animal rights activists. In July, lawmakers voted down a draft amendment to the law on animal protection that would have allowed for the slaughter of animals without prior stunning, as required by Jewish and Muslim law, if carried out so as to follow religious customs.

Terry Sanderson, president of the National Secular Society, said: "Given the large majority in favour of this resolution, I certainly hope that the Council of Europe will not give in to pressure from religious sources and compromise it. It is clearly a breach of a child's human rights to have unnecessary surgical procedures at an age when the individual concerned cannot consent. Europe must stand firm."