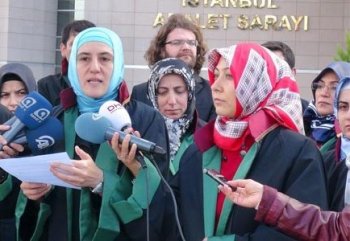 The Turkish Supreme Court has lifted the ban on female lawyers wearing hijabs when registering with the Turkish Bar Association. Previously the photo submitted with the application for registration had to be without headcovering according to the association's bylaws.

The case followed a complaint from a female lawyer who said she was being discriminated against on grounds of her religion. She had been asked to provide a photo without hijab. Now the court has ruled that as long as the face, forehead and chin are visible, women can wear headcoverings on ID photos.

The court said that the ban contradicted the spirit of the constitution as well as a woman's right to work and her religious freedom.

Female lawyers have been permitted to wear headcoverings in court since January when the ban on them was reversed by the State's Council, the highest judicial authority in Turkey.

The hijab had been banned in public buildings, universities and government offices since the military coup in 1980. Then, in 2008, the Islamist government lifted the ban in universities and then last year on the ban in Islamic schools. The Prime Minister, Recep Tayyip Erdogan, lifted the ban in state institutions, except for judges, public prosecutors, police officers and members of the armed forces. In October, for the first time in 14 years, a female MP wearing a hijab was admitted to parliament, effectively scrapping the ban.