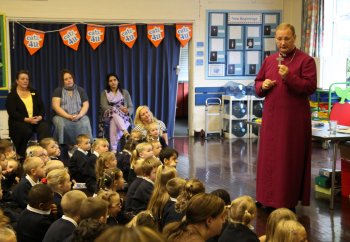 The board of governors of a community school in Sheffield has voted to strengthen its existing policy on religious visitors following concerns about the agenda of external visitors to the school.

All religious visitors will now be expected to abide by a code of conduct which expressly prohibits prosetelysing or the repeating of religious phrases.

The move follows a lengthy dialogue with school concerning the "long-standing relationship" the school had with the evangelical Christ Church Fulwood, and its role in school activities.

The school's new policy states that no faith, or non-faith (eg. humanist) group will be allowed in to the school more than once in any academic year. Christ Church Fulwood will be still be able to visit the school to lead 'collective worship' once a year in place of the current 6-8 times a year.

The school will continue to provide a 'broadly Christian' worship (as required by law), but this will be provided by school staff in most cases. The school has also made firm commitments to balance the attendance of Church of England Christian faith groups by having Jewish, Muslim and Quaker attendees once a year too.

The school has issued a letter to all parents making clear that the school is a non-faith school and that no special relationship will exist with any Church.

Saul Freeman, a parent with a child at the school, said: "We are very pleased that the school has now adopted an objective, equitable and transparent policy on religious visitors and that an evangelical church will no longer enjoy such easy access to children. But we remain very concerned that the issue had to be pursued at the level of the school. All children, particularly in non-faith schools, should be protected from religious groups seeking to gain influence and converts. This should be a clear and transparent matter of educational policy to ensure that the rights of all children are respected."

Mr Freeman has been invited to a meeting with the Director of the Local Education Authority to discuss what lessons can be learned. Mr Freeman said he will press the LEA to issue clear guidance on external visitors to Sheffield schools.

Saul Freeman's experience with the school was featured in a recent National Secular Society report on evangelism in schools, which called the role of external religious visitors in schools into question.

Responding to the report, Elizabeth Truss, Parliamentary Under Secretary of State for Education and Childcare, ruled out national guidance, saying schools should be "trusted to observe best practice". She said parents with concerns should raise them with the school and with Ofsted.

Stephen Evans, campaigns manager at the National Secular Society, said: "We commend the school for taking the necessary steps to try and ensure that the education they provide does not run counter to parents' religious and philosophical beliefs. We hope other schools and local authorities will now question the appropriateness of allowing their schools to be used to further the missionary objectives of religious groups.

"We also congratulate the parents for raising this issue with the school. For too long parents have put up with religion being imposed upon their children, against their wishes. The rights and wishes of all parents are best balanced by schools providing objective education about religion and belief in a religiously neutral environment.

The National Secular Society's report, Evangelism in Schools, can be read here.