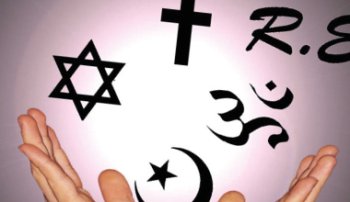 A third of community schools and over a third of academies without a religious character are failing to meet their legal or contractual agreements to provide religious education, according to a survey published today by The National Association of Teachers of Religious Education (NATRE).

RE is a compulsory subject in all English schools, and the only statutory subject that is not part of the National Curriculum. Local authority controlled schools teach a syllabus determined by local committees, largely dominated by religious representatives. Schools and academies with a religious character (faith schools) are free to teach their own syllabus – which may be confessional in nature.

NATRE say the subject has been "edged out" of schools by government reforms, and is using the research to lobby the government for additional resources and strengthened provision of RE.

However, the National Secular Society has called for serious reform of RE to make the subject relevant.

Stephen Evans, National Secular Society campaigns manager, said: "Without any clear educational purpose, it is not surprising that many schools fail to take religious education seriously.

"Education about religion and belief needs to be revitalised by scrapping the dated concept of RE and replacing it with a new objective National Curriculum subject for all pupils. To develop young people's understanding of the world we live in, pupils should be equipped not only with a good understanding of a range of faith perspectives and world religions, but also of non-religious beliefs and secular ethics. A reformed subject would enable young people to take a more balanced approach to the consideration of moral and ethical issues.

"Rather than allowing the Church of England and other faith groups to dictate what is taught in schools, any subject covering religion and belief should be devised by the same process as other National Curriculum subjects. It goes without saying that faith schools should lose their ability to teach about religion from their own exclusive viewpoint."

The National Secular Society's position on RE is set out in full here.