New paper calls for secular ceremony of remembrance at the Cenotaph 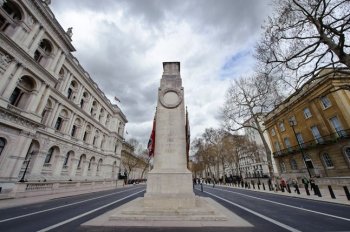 A new academic paper examining the origins of the Cenotaph and the ceremonies surrounding it has questioned the role of the Church of England at the annual ceremony of remembrance at the Cenotaph, and calls for the event to be made more inclusive.

The paper, by Professor Norman Bonney, emeritus professor at Edinburgh Napier University, and a director of the National Secular Society, argues that in a religiously diverse nation where large sectors of the population do not hold or practise religious beliefs, it is no longer appropriate for the Church to lead the nation in remembrance.

The Remembrance event has changed little since it was first introduced in 1921. Christian rituals are prominent, hymns are sung, a bishop leads a religious procession, and cross is born in front of the procession and the bishop invokes the 'Lord Jesus Christ' in a prayer.

The paper reveals that the Cenotaph monument was deliberately designed and approved by the Cabinet to be a secular monument without Christian or other religious inscriptions or features because of the diversity in the beliefs of the allied and Empire dead of the First World War.

The paper demonstrates the initial hostility of the Church of England to the monument and outlines its attempts to replace the ceremony with one in Westminster Abbey at the tomb of the Unknown Soldier – a second monument to the dead of the First World War that was devised to become an alternative focus for national remembrance. This attempt failed because of strong public preference for a ceremony at the Cenotaph.

The paper's author, Norman Bonney, said; "Changes in religious belief, emphasised in recent census findings, demonstrate that Christianity in general, and the Church of England in particular, can no longer be fully inclusive of the whole community, particularly when over a quarter of the population have no religion. It is therefore right to question the appropriateness of the Church being so closely associated with a national ceremony of remembrance which should be equally inclusive of all citizens, regardless of religion and belief."

A summary of the paper, The Cenotaph: A consensual and contested monument of remembrance, can be found here.

Read the paper in full.