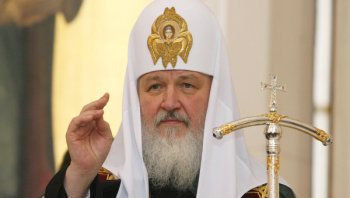 "The Church is defending its freedom because it is sure that only its independence gives it the possibility of being a full-scale spiritual authority. Any form of convergence of the Church and state is dangerous for the cause of God. Only the word of a free Church sounds loud and convincingly," he said in an interview with Smolenskiye Novosti newspaper.

He has repeatedly denied that church and state are becoming too closely aligned, saying that clergymen are strictly forbidden from assuming any government functions while, at the same time, the state does not have direct influence over the Church.

"We don't want the repetition of history because we are convinced that the bloody developments of the beginning of the 20th century and the persecution of the Church that followed them largely resulted from its enslavement by the state" Kirill said.

He stressed that the Church is not trying to influence politics, although judging by recent events this is arguable. He said it only addressed the political issues while "trying to bring it home to every person that life without God is senseless and useless."

The patriarch also recognised that Russia is still experiencing the effects of the period of atheism during the Soviet era. "In order to cure the spiritual wound inflicted by atheism we should all help people take the path of new church-going. And I believe that God will be with us on this road," he said, adding that the current church reforms are being conducted with this purpose.

Earlier this year President Vladimir Putin said that Russia was a secular state and that church and state were distinct entities. At the same time he said that the nation would be based on Christian values. He then said that he wanted to ban hijabs in schools and ban discussion of homosexuality (at the behest of the Orthodox Church) "People in many European countries are ashamed, and are afraid of talking about their religious convictions. [Religious] holidays are being taken away or called something else, shamefully hiding the essence of the holiday", the "secularist" Russian president added.