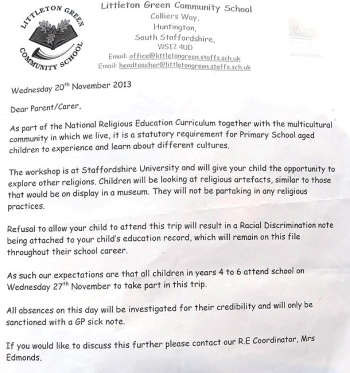 A head teacher has been forced to apologise after threatening to punish children for racism if they missed a religious awareness workshop.

Parents of children at Littleton Green Community School in Cannock were angered by a letter sent from the school informing them that a 'racial discrimination note' would be attached to their child's education record if they did not attend a workshop about Islam as part of the children's "cultural education".

Donna Ward, whose daughter attends the school, told the Express & Star: "It's not our religion. We should have a right to stop our children going."

Defending the decision, the school's head teacher, Lynn Small, said that exposing the pupils to other faiths was part of the school's statutory duty. She said: "We are a mainly Christian school, but we have to cover at least one other religion as part of the national curriculum."

After an intervention from the local authority the school has since written to parents to apologise for "inaccuracies" in the previous correspondence. In the letter, the school's head teacher asked parents to "on reflection disregard a section from the earlier letter."

Stephen Evans, campaigns manager at the National Secular Society, said: "It is useful for young people to understand the significance of religion in society, and the importance of faith to many people.

"However, many parents are concerned about the way education about religion is currently handled in schools, and it is not uncommon for them to face difficulties when attempting to exercise their right to withdraw.

"We find parents are often unjustifiably accused of 'bigotry' for wanting to withdraw their children from biased RE classes, but the conflation of race with religion in this particular case is particularly disturbing."

THE ORIGINAL LETTER IN FULL:

As part of the National Religious Education Curriculum together with the multicultural community in which we live, it is a statutory requirement for Primary School aged children to experience and learn about different cultures.

The workshop is at Staffordshire University and will give your child the opportunity to explore other religions.

Children will be looking at religious artefacts similar to those that would be on display in a museum. they will not be partaking in any religious practices.

Refusal to allow your child to attend this trip will result in a Racial Discrimination note being attached to your child's education record, which will remain on this file throughout their school career.

As such our expectations are that all children in years 4 and 6 attend school on Wednesday 27th November to take part in this trip.

All absences on this day will be investigated for their credibility and will only be sanctioned with a GP sick note.