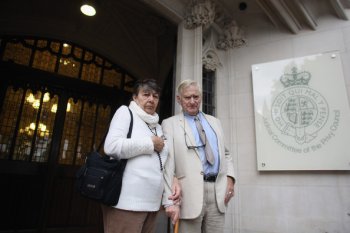 The Supreme Court has rejected an appeal by the owners of a guest house after they had been found guilty of discrimination against a gay couple who wanted to stay in a double room.

The court rejected a legal challenge by Peter and Hazelmary Bull who turned away civil partners Martin Hall and Steven Preddy, from their Chymorvah Hotel near Penzance in 2008. The Bulls' claimed they had a policy of not allowing unmarried couples of whatever sex to share double bed rooms, but NSS council member Ray Newton said that he had shared such a room with his (opposite sex) partner at the hotel – even though they aren't married. There was never any question asked about their marital status, even though they signed the register with different surnames.

The Bulls would have been prepared to have accommodated the same sex couple in a twin bedded room, and helped with the finding of alternative accommodation and contributing the additional cost.

Judges had already twice ruled the Bulls broke equality laws in the running of their business. In February, the Court of Appeal upheld a ruling against the Bulls made by Bristol County Court in early 2011. It stated that the Bulls' behaviour amounted to direct discrimination on the grounds of sexual orientation, and awarded a total of £3,600 damages to Mr Hall and Mr Preddy.

With the support of the Christian Institute, the Bulls then took the case to the Supreme Court where on Wednesday 27 November five justices ruled against them.

Lady Hale, deputy president of the Supreme Court, said: "Sexual orientation is a core component of a person's identity which requires fulfilment through relationships with others of the same orientation."

The deputy legal director at the Equality and Human Rights Commission, Wendy Hewitt, added: "The courts have been very clear throughout this long-running case that same-sex couples should not be subjected to discrimination when accessing services. This is what Parliament intended when it approved the 2007 Sexual Orientation Regulations and then passed the Equality Act 2010, well aware that gay men and lesbians have long suffered discrimination when seeking to stay away from home as a couple."

The Bulls and supporters claim homosexual rights have trumped their religious rights. The judgement could not have refuted that more emphatically: "If Mr Preddy and Mr Hall ran a hotel which denied a double room to Mr and Mrs Bull, whether on the ground of their Christian beliefs or on the ground of their sexual orientation, they would find themselves in the same situation that Mr and Mrs Bull find themselves today."

The Bulls also believe that they should be able to discriminate because this was their "home". The court clearly believed instead that the private hotel was covered by the equality legislation which refers to "accommodation in a hotel, boarding house or similar establishment". The only possible grounds for exemption relate to "religious organisations, as opposed to individuals." The Bulls had considered exploiting that option, prior to closing down their establishment, which followed a downturn in business partly connected to their admissions policy.

The Supreme Court relied in this respect on a key judgement of the Grand Chamber in Bayatyan v Armenia: "Freedom of thought, conscience and religion ... is, in its religious dimension, one of the most vital elements that go to make up the identity of believers and their conception of life, but it is also a precious asset for atheists, agnostics, sceptics and the unconcerned. ... That freedom entails, inter alia, freedom to hold or not to hold religious beliefs and to practise or not to practise a religion."

The case was decided on the basis that Messrs Hall and Preddy's civil partnership is practically "indistinguishable from the status of marriage", and therefore the Bulls could not discriminate against them while accepting opposite sex married couples. On the other hand, in the words of the judgment: "They are also free to continue to deny double-bedded rooms to same sex and unmarried couples, provided that they also deny them to married couples."

See also: Turning away a gay couple doesn't make you a Christian martyr