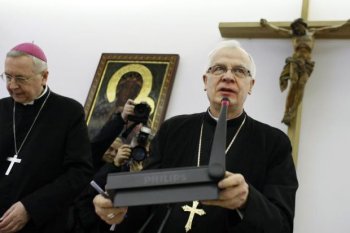 Polish radio is reporting that a man who, as a child, was abused by a Catholic priest has written to the Pope after the Church refused to entertain a compensation claim.

The man, whose identity is protected by Polish privacy laws, is being referred to as Marcin K, and claims he was abused by Father Zbigniew R. from 2000-2001 in Kolobrzeg, northern Poland.

The priest was sentenced to two years imprisonment in 2012, but after claiming he was suffering health problems, he was released and did not serve any of his sentence.

Marcin K. says the Church knew what was happening but refused to do anything about it. He is the first person in Poland to try to obtain redress from the Church for abuse.

Marcin K. then wrote to Pope Francis: "This letter is a cry for all children who have been wronged in Poland. Your Holiness, the events of my childhood destroyed my ability to find pure love and trust. The fear of intimacy and lack of confidence in people mean that I cannot enter into a healthy relationship with another person."

Meanwhile, representatives of the Polish Catholic Church have apologised for the alleged child sex abuse carried out by Archbishop Josef Wesolowski, a 65-year old Pole who served as a papal envoy in the Caribbean island of the Dominican Republic and his 38-year-old Polish colleague Fr Wojciech Gil.

Prosecuting authorities in the Dominican Republic allege that the two men abused several boys while working there. Bishop Wojciech Polak, speaking for the Polish Bishops Conference, said: "Trust in the Church is waning. We are sorry. This is the least we can do."

Wojciech Gil, who was added to the Interpol list of wanted criminals late last month and is currently residing with his parents in southernPoland. He denied any wrongdoing in an interview with public broadcaster TVP last week. Polish prosecutors have now launched a separate investigation into the priests.

Polish Episcopate spokesman Father Jozef Kloch rejected claims that the Polish Church is trying to cover up paedophilia, and noted that new guidelines had been adopted on the matter in March 2012.

But Jesuit priest, Father Adam Zak, who is responsible for youth welfare in the Polish Episcopate said: "The scale of paedophilia in the Church in Poland is unknown. The cases that end up in court are just the tip of the iceberg."

He said 27 priests were convicted of child sex abuse in Poland over the past decade.

Meanwhile, in Argentina a priest has been given a 15-year jail sentence for the sexual abuse of adolescent boy in the 1990s. At the time of the original accusations, Fr Julio Cesar Grassi was defended by Cardinal Jorge Bergoglio (later to become Pope Francis).

Grassi was leader of the Buenos Aires Happy Children Foundation, a centre for troubled boys when the crime took place and he has maintained his innocence throughout. He was jailed by the provincial court in Moron. He told the court: "In my life, all I have done was to help the children in need. The prosecutors have lied and set up a case against me."

The case is making headlines in Argentina because — according to the Wall Street Journal — Bergoglio gave an interview to the Argentine magazine Veintitres in 2006 in which he said: "There is a media campaign against Fr Grassi, a condemnation in the media." He said that Grassi had not been suspended from his duties as a priest because his case was "different" from other cases of alleged sexual abuse that emerged at the time.

Grassi was first accused in 1996. He was eventually convicted of aggravated sexual assault in 2009, but while the several appeal processes were heard, he was allowed to live across the road from the youth centre. He has one more appeal to make to the Supreme Court, which he will do from prison.

After Grassi's conviction in 2009, Bergoglio commissioned a legal study defending the priest and insisting that he was innocent. The report said that many sexual abuse claims were part of a strategy to defame the church.