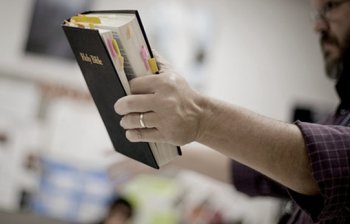 A new report published by the National Secular Society has revealed that publicly funded schools are being targeted and exploited by evangelical Christian groups as part of their missionary work.

The report, Evangelism in state schools – the role of external visitors in publicly funded education (pdf), reveals a determined push by evangelical churches and organisations to gain access to state schools with the intention of proselytizing among young children.

The report finds that the activities of external visitors are often undertaken in schools without parents' knowledge and with little, if any, opportunity for withdrawal.

According to the report, the motivations and aims of religious groups, either out of complicity or naivety, are going unquestioned by head teachers, governors, Local Education Authorities and the Department for Education.

The National Secular Society has written to Education Secretary, Michael Gove, calling for national guidance setting out best practice for working with external visitors and contributors and particularly religion and belief groups.

The report also calls for all schools to publish and adhere to an external visitor's policy which forbids proselytizing and evangelism and makes clear that parents should be given prior and relevant information about school visitors.

"Having sent our child to a non-religious state primary school, we never expected to find ultra-conservative evangelical activity. Our son's school has never been open with parents about its close links with a local evangelical church despite our best efforts to get clarity.

"Adults who come in and lead school assemblies are seen by the children as authority figures in the local community – and this means that the school has conferred a status of trust and respect on a group of individuals who preach hate and a fundamentalist, literalist and creationist approach to religion and life."

Stephen Evans, National Secular Society campaigns manager, said that the educational purpose of religious education is so vague that it is open to exploitation by aggressive religious groups that are determined to reach children in schools.

He said: "The legal obligation on all schools to provide religious education, and a daily act of worship provides a foot in the door to organisations with evangelistic intentions. The ambiguity about the specific aims and purpose of religious education, and its low status in schools, provides an ideal environment for evangelical groups to exploit.

"Given the diminishing interest in religious observance amongst young people and their parents, it's easy to see why evangelical groups are so keen to access schools. But we have to question the appropriateness of state schools being used in this way. The presence of such groups undermines the rights of parents who rightly expect a state education for their child that doesn't run counter to their own religious and philosophical convictions."

"The targeting of our schools in this way by such dubious organisations must be tackled by the Department for Education. Most parents have absolutely no idea that such groups are present in their children's school until the child comes home and starts repeating the messages they've been given – sometimes about creationism, sometimes manipulative evangelical messages or literature that reinforces a very conservative religious outlook on life."

Mr Sanderson said the whole issue of religion in schools needs to be urgently reassessed.

"Our schools are becoming playgrounds for religious interests who are exploiting their opportunities to the full. The increasing number of faith schools is not going to make this any better. With fewer and fewer people regarding themselves as religious, it is clear that faith groups see schools as their best hope of reviving their fortunes. Children have to be there by law, they are a captive audience."

See a list of evangelical groups active in schools

Research into the activities of evangelical groups in schools in ongoing. If you have information or concerns about external visitors in a particular school, please use the form on this page to provide details.

The NSS is calling for religious education to be replaced with a new National Curriculum subject that allows pupils to take a more objective and religiously neutral approach to the consideration of moral and ethical issues. Read our briefing paper setting out the need for comprehensive reform of RE.