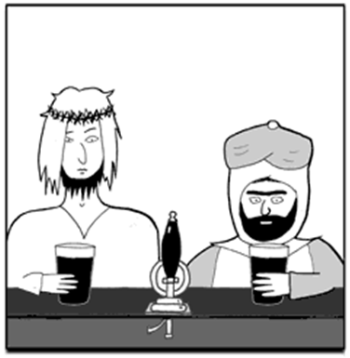 A row over free expression has broken out at the London School of Economics after members of the LSESU Atheist, Secularist and Humanist Student Society were told they would be physically removed from the annual Freshers' Fair unless they covered up t-shirts deemed "offensive".

Student Union officials removed materials from the LSESU Atheist, Secularist and Humanist Student Society stand and demanded that the group removed t-shirts they were wearing featuring satirical Jesus and Mo cartoons. When asked for an explanation, LSESU officials stated that several students had complained about the t-shirts.

After a period of consultation a member of the LSE Legal and Compliance Team and Head of Security told the members of the Atheist, Secularist and Humanist Society that the wearing of the t-shirts could be considered "harassment", as it could "offend others" by creating an "offensive environment".

After challenging the actions of LSE officials, members of the Society were told they were not behaving in an "orderly and responsible manner". The group eventually complied by covering the t-shirts, but were closely followed by security guards for the remainder of the day.

In a written statement, Abishek Phadnis and Chris Moos of the LSESU Atheist, Secularist and Humanist Society, said:

"We reject in the strongest possible terms that by wearing a non-violent, non-racist t-shirt we would harass other students or create an "offensive environment". We reject completely that we were not behaving in an "orderly or responsible manner". In fact, when faced with the entirely unreasonable request to change or cover up our clothing, we remained calm and asked for clarification on what rules or regulations we were alleged to be in breach of. Even though we completely disagreed with the instructions of the LSE, we still complied, making clear that we would challenge this decision through the appropriate procedures.

"As much as we respect and defend the rights of others to wear whatever they choose to wear, we claim this right for ourselves. Our right to free expression and participation in the LSE student community is being curtailed for no other reason than that we are expressing views that are not shared by others. The t-shirts worn are harmless satirical depictions of fictitious religious figures and certainly cannot be considered intimidating, hostile, degrading, humiliating or offensive to anyone by even the most stringent standards."

This is not the first time that the Society has been caught up in a row over causing offence at LSE.

In 2012 the LSE Students' Union effectively made blasphemy an offence following protests from Muslim students about a Jesus and Mo cartoon posted on the LSE Atheist, Secularist and Humanist student group's Facebook page.

The LSESU passed a motion proposing that 'Islamophobia is a form of anti-Islamic racism'. The Union resolved "To define Islamophobia as "a form of racism expressed through the hatred or fear of Islam, Muslims, or Islamic culture, and the stereotyping, demonisation or harassment of Muslims, including but not limited to portraying Muslims as barbarians or terrorists, or attacking the Qur'an as a manual of hatred".

It said it would take a firm stance against all Islamophobic incidents at LSE and conduct internal investigations if and when they occur.

Also in 2012, students from the University of Reading Atheist, Humanist and Secularist Society were forced to leave the Freshers' Fair after they labelled a pineapple "Mohammed" and put it on their stall.

LSESU Atheist, Secularist and Humanist Student Society are being supported by the National Secular Society.

Stephen Evans, NSS campaigns manager, said: "There is something very disturbing about the curtailing of free speech on university campuses simply on the grounds of claimed offence. Being offended from time to time is the price you pay for living in an open and free society. If any religion is off-limits for open debate we are in a very dangerous situation."

UPDATE
Read an account of day 2 of the LSE Freshers' Fayre from LSESU Atheist, Secularist and Humanist Student Society.