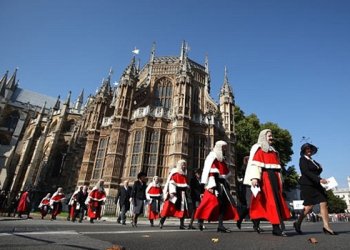 Two members of the National Secular Society have written to the Justice Secretary, Chris Grayling, asking that he end the Anglican Church service in Westminster Abbey that marks the opening of the judicial year on 1 October.

The church service — complete with the judges wearing wigs and gowns and gilt regalia processing into the Abbey — is seen by Peter Fisher, a long-serving Justice Ministry official and John Butcher, once a parliamentary candidate for the Tories and now a Councillor in Surrey, as an inappropriate reinforcement of the link between the Church and the state.

In their letter to the Justice Minister they say that in an increasingly secular and multi-faith society it is wrong for judges to be seen paying homage to one denomination, the Church of England.

The letter says that they fear the church service risks prejudicing decision on religious matters and asks that the names of judges attending the Abbey since 2007 to be published. The two say they have no objection to judges attending services in a private capacity.

In medieval times, they point out, it was customary for judges to seek "divine guidance" for judicial decisions. Judges are at risk of seeming biased in cases involving a witness or defendant in which an issue of religion arises, they argue. "The judge trying such a case is placed in a difficult position if [he or she] has attended the judges' service [and] may appear to have prejudged the religious issue by publicly appearing to support particular beliefs," their letter states.

They add: "In Scotland there has long been a related tradition of holding two judges' services at the start of each legal year: a Protestant service in the Kirk, and a Catholic 'Red Mass'. That practice is now a topic of public controversy in Scotland, where it is currently under debate, and so may well soon have to be changed."

Mr Butcher and Mr Fisher ask Chris Grayling to cancel the service in the Abbey but allow the Lord Chancellor's breakfast that follows the service to continue, since that is not a religious event.

Next Tuesday's procession will be led for the first time by the new Lord Chief Justice, Sir John Thomas.

Fisher told The Guardian that he knows "for a fact" that some judges are quite uneasy about [attending the Abbey service]. Judges are reluctant to complain about it, however, in case it adversely affects their careers.

Butcher said: "To attend the service in public, in judicial time, in this way really does compromise their independence." One way of resolving it, they warn, would be a judicial review of the practice – decided by a judge who had never previously attended the service.

He points to the case of Lord Justice Laws — himself an Anglican and married to a prominent theologian — who dismissed the appeal of the Christian marriage guidance counsellor Garry McFarlane who did not want to provide services to gay couples.

His judgement was a model of secularism, including this passage:

"We do not live in a society where all the people share uniform religious beliefs. The precepts of any one religion — any belief system — cannot, by force of their religious origins, sound any louder in the general law than the precepts of any other. If they did, those out in the cold would be less than citizens and our constitution would be on the way to a theocracy, which is of necessity autocratic.

"The law of a theocracy is dictated without option to the people, not made by their judges and governments. The individual conscience is free to accept such dictated law, but the state, if its people are to be free, has the burdensome duty of thinking for itself."

Mr Rozenberg expressed some sympathy with the points that Mr Butcher and Mr Fisher had made and thought the church service was, indeed, not appropriate. He wrote:

"Much though I enjoy legal traditions of all kinds, I do wonder whether it is still appropriate for judges of many faiths and none to pray together for guidance. It is not very edifying to see independent judges taking part in religious rites which are, at best, meaningless to them and, at worst, offensive to their actual beliefs."

Rozenberg discouraged the two from carrying out their threat to challenge the whole thing in court:

Mr Rozenberg did, however, have strong reservations about the cost of the proceedings.

The Ministry of Justice was quick to dismiss the protest, a spokesperson telling The Guardian: "We believe concerns about possible religious bias resulting from the judges' service are completely unfounded. On appointment every judge is required to take both the oath of allegiance to the Crown and the judicial oath which requires them 'to do right to all manner of people after the laws and usages of their realm without fear or favour, affection or ill will'. Judges attach the greatest importance to this oath and reach decisions without partiality or bias of any kind, including on matters of religious faith."

In May this year, the NSS raised objections to similar ceremonies taking place in Scotland, which additionally have a sectarian element. The NSS wrote to Kenny MacAskill MSP, the Scottish Government's Cabinet Secretary for Justice to draw his attention to a possible undermining of the impartiality, integrity and independence of the Scottish judiciary.

The NSS complaint relates to two ceremonies, the Red Mass (Catholic) and the 'Kirking of the Court' (Protestant). At the ceremonies, which are attended by all levels of the judiciary in Scotland, judges are invited to request 'guidance from the Holy Spirit' for all who seek justice.

See here for more details of our complaint.