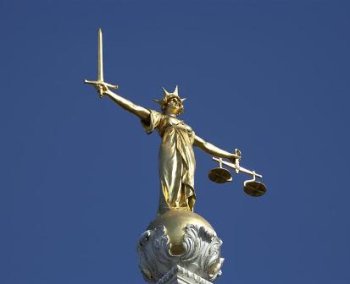 The National Secular Society has expressed concern over a court's decision to allow a Muslim woman to stand trial wearing a full-face veil, only needing to remove it while giving evidence.

The case involves a 22 year old woman accused of allegedly intimidating a witness, involved in a separate case, in June this year. The woman had previously been allowed to enter her plea after she agreed to lift her veil in front of a female police officer, in a room next to the court.

Ruling at Blackfriars Crown Court on how the case should proceed, Judge Peter Murphy said he proposed to adopt "the least restrictive approach" consistent with what he saw as the necessity of enabling the Court to conduct the proceedings fairly and effectively in the interests of all parties.

"It is unfair to ask a juror to pass judgment on a person whom she cannot see. It is unfair to expect that juror to try to evaluate the evidence given by a person whom she cannot see, deprived of an essential tool for doing so: namely, being able to observe the demeanour of the witness; her reaction to being questioned; her reaction to other evidence as it is given. These are not trivial or superficial invasions of the procedure of the adversarial trial. At best, they require a compromise of the quality of criminal justice delivered by the trial process. At worst, they go to its very essence, and they may render it altogether impotent to deliver a fair and just outcome. They drive a coach and horses through the way in which justice has been administered in the courts of England and Wales for centuries."

However, Judge Murphy later then went on to conclude:

"While it remains true that juries scrutinise defendants throughout the proceedings, and take note of a defendant's reaction to the evidence as it is given throughout the trial, I am not persuaded that this is of sufficient importance to require a restriction on the defendant's right to wear the niqaab."

However, the judge said it was necessary for a democratic society to restrict the rights of a defendant to wear a niqab during court proceedings. He said:

"Balancing the right of religious manifestation against the rights and freedoms of the public, the press and other interested parties such as the complainant in the proper administration of justice, the latter must prevail over D's right to manifest her religion or belief during the proceedings against her to the extent necessary in the interests of justice. No tradition or practice, whether religious or otherwise, can claim to occupy such a privileged position that the rule of law, open justice and the adversarial trial process are sacrificed to accommodate it. That is not a discrimination against religion, it is a matter of upholding the rule of law in a democratic society."

He said he hoped that parliament or a higher court would review the issue "sooner rather than later" and provide a "definitive statement of law".

Responding to the ruling, Keith Porteous Wood, executive director of the National Secular Society, said: "In the interest of justice, we consider it vital that defendants' faces are visible at all times, including while others are giving evidence. We therefore regret the judge's decision not to require this, despite making the case for it in his ruling. We will now be calling for visibility of defendants throughout court hearings to be made mandatory, and not subject to judges' discretion."

The full ruling is available here