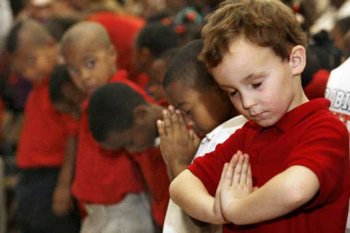 A group promoting fundamentalist Christian values in the United States is demanding the right to deliver "inspirational messages" during public school assemblies.

The American Family Association (AFA) in Kentucky are petitioning governors to enact legislation that permits children to pray in school assemblies and other formal school events.

School prayers have been prohibited in the United States since 1962 when the Supreme Court ruled (in Engel v. Vitale) that government officials had no business writing prayers and compelling school pupils to say them. The landmark court decision established the framework for secular public schools welcoming students of all faiths as well as those who have no religion.

In their petition to Kentucky governors, the AFA claim the Supreme Court's 1962 ruling on school prayer "opened the door" to the AIDS epidemic, and the group link the court's decision to falling SAT scores and a rise in sexually transmitted infections, teenage pregnancies and violence.

Responding to the petition, Sarah Jones, communications associate at Americans United for the Separation of Church and State, said: "The AFA is clearly in the wrong. They're wrong to claim that, somehow, prayer affects rates of AIDS, teen pregnancy and SAT scores. And they're wrong to pressure Kentucky's state government to endorse religion."

Similar bills that permit students to read and recite 'inspirational messages' in school assemblies have been signed into law in Florida in 2012 and in Mississippi in 2013. Despite teachers and school officials being barred from any form of proselytising, and the word prayer not being included in either bill's language, religious activists claim the legislation legalises religious prayer and instruction in public schools.

The American Civil Liberties Union (ACLU) and Americans United for the Separation of Church and State dispute this interpretation and each separately issued warnings to local school districts that moving ahead with the policy could subject them to legal challenges.