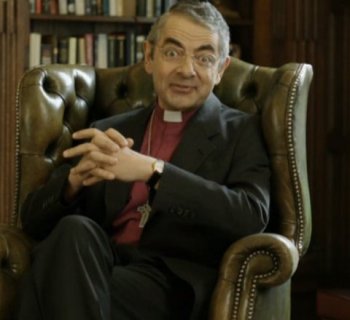 A sketch by Rowan Atkinson that was shown on BBC as part of the Comic Relief fund-raising event has been cleared of being offensive by the media regulator Ofcom.

In the sketch, Atkinson – dressed up in his comic vicar costume - sent up the Archbishop of Canterbury and compared Jesus's disciples to a boy band. He also said that prayer doesn't work.

The sketch drew more than 2,200 complaints and caused the BBC, for some reason, to issue its own apology, saying the sketch did not "translate" as they had hoped. They cancelled a follow-up sketch and deleted the sketch from the iPlayer.

The Ofcom adjudication says: "In reaching this decision we took into consideration the context of the material.

"This included that Comic Relief is widely known for featuring irreverent and often absurd comedy sketches; the intention of the sketch was to create humour rather than seriously deride Christianity; and that the BBC took immediate action on the night of the broadcast, including issuing an apology for the tone of the sketch, removing it from BBC iPlayer and withdrawing a follow-up sketch due for broadcast later in the evening."

Terry Sanderson, President of the National Secular Society, said: "Most of these complaints were the result of an orchestrated campaign by Christian activists. The BBC is far too sensitive on this issue and was cowardly and censorious in rushing to delete the sketch from iPlayer. Ofcom's response is much more sensible and considered."