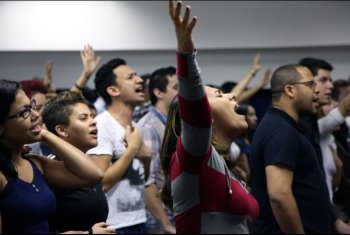 Since 2005, there has been a 50% increase in the numbers of people attending Pentecostal Churches in London — a phenomenon explained by a large influx of immigrants from Africa during that period.

In the same period, the number of Anglican church-goers has declined by 9%, while Catholic worshippers have risen by 1%, again mainly due to immigration from Eastern European and Latin countries.

The new study carried out for the evangelical group The London City Mission by the Brierley Consultancy showed that 230,000 people attended Pentecostal services last year compared to 198,300 at Catholic Masses.

According the Churches Census, which recorded congregation sizes on a Sunday in October 2012, Pentecostal churchgoers now make up 32% of Sunday worshippers in London, compared to 27% for Catholics and 12% attending Anglican churches.

In 1979, 333,700 Catholics went to church on Sunday. This represents a decline of 40%, the same percentage decline as for Anglican churches.

Other traditional Christian denominations have also declined since 2005, with the Methodists down 11%; United Reformed down 14% and Baptists down 9%. All are continuing to decline.

Overall, though, because of the Pentecostal growth, church-going in London rose by 16 per cent between 2005 and 2012 to 720,000. This means that nearly 10% of Londoners attend a church each week, compared with 5.6% nationally.

Pentecostal churches now make up 30% of the total number of churches in London — more than 1450 of them. The only other denomination with more than 1,000 churches in the capital is the Church of England.