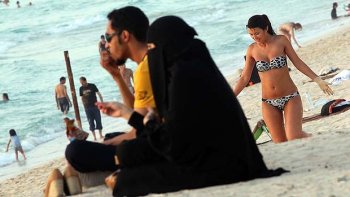 A 24 year old Norwegian woman who was raped in Dubai has herself been sent to jail, convicted under sharia law of having sex outside of marriage.

Norwegian Foreign Minister Espen Barth Eide said to the NTB news agency that the verdict "flies in the face of the notion of justice."

She said: "It appears very odd that a person who reports rape is convicted for crimes that in our part of the world are not considered crimes. Additionally, this verdict is highly problematic from a human rights perspective."

Ms Dalelv's father said: "In my view, this is completely absurd. It's a natural reaction to go to the police when you have been raped. You don't expect to be sent to jail yourself."

His daughter reported the alleged rape on March 6th to Emirati authorities in Dubai, but they confiscated her passport and money and later went on to prosecute her instead.

Her mother Evelyn told NRK that she can no longer sleep, as she lies awake thinking of her daughter in prison.

Ms Delelv has been supported during the trial by a Norwegian pastor's wife who sat with her throughout as men and women are not allowed to sit together.