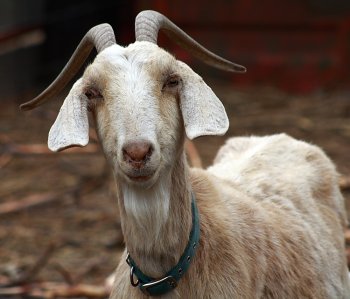 A Somali refugee who improvised a halal abattoir in a private house where he killed four goats, has been sentenced to a 12 months in jail suspended for two years by an Irish court.

Rashid Kibaga pleaded guilty to operating an unlicensed abattoir and cruelty to animals after he cut the throats of the four goats and allowed them to bleed to death in a house in Balloonagh, Tralee.

The police had been alerted to the incident by people living nearby who had heard the goats "screaming in pain". When they arrived, they found Rashid Kibaga and two other unidentified men who also lived at the Atlas House asylum seekers' hostel in Tralee.

Two of the animals had been skinned and another had been beheaded. The animal's head was lying on the ground near a number of knives and a large pool of blood. A fifth kid goat was found alive in a shed on the premises.

Animal welfare inspectors were called to the scene and took away the kid goat which was described as being in very poor condition. In their report they said that the goats "would have felt pain and been terrified" while being killed.

Mr Kibaga said that he had killed the animals in the ritual halal fashion not realising that it was against Irish law to treat animals like this. He had no previous criminal record.

Brian McInerny, acting for the defence, said that his client was a strict Muslim and this was the sort of thing he would have done all his life in Somalia. He had no idea it was illegal. He now accepts his actions were wrong and "apologises to the people of Ireland for offending them."

The judge in the case said that while he respected Mr Kibaga's religious beliefs, the law of the land had to be observed. He agreed with the defence barrister that a custodial sentence would not be necessary, even as a deterrent, as it was "unlikely that an outbreak of goat-slaying would break out in Tralee."