Girlguides should not be allowed to use church halls, says CofE vicar 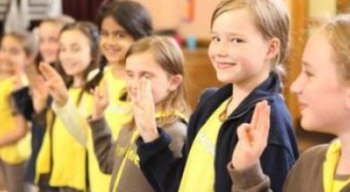 A Church of England vicar has called for Girlguide groups to be booted out of church halls after they decided to drop references to God from their oath.

Most Guides (including Brownies and Rainbows) meet on church premises, and many are directly sponsored by their local church. I ask how any priest can allow them — now — to meet on church premises, when the Girl Guide movement publicly cuts out the promise to God taken for nearly 100 years by all leaders and members. To allow the use of church halls to such a movement is hypocrisy, and gives out a message — from the Church itself — that God does not matter.

Terry Sanderson, President of the National Secular Society, said: "This is a prime example of the spiteful, selfish approach that so many conservative Christians imagine is piety. Mr Williams seems to forget that many church halls receive large amounts of money from the Big Lottery Fund on the understanding that they would be used as a community resource, not as a religious battleground."

The Heritage Lottery Fund provided St George's Church with £31,706 in 1998 towards "the construction of a purpose-built community centre to provide facilities for voluntary organisations in the borough of Hounslow."