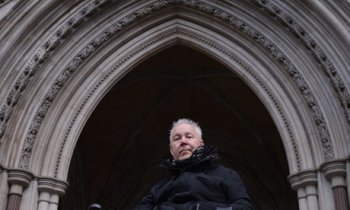 The Appeal Court has ruled that it has no power to grant people the right to voluntary euthanasia, and that it is a decision for parliament to make.

The ruling related to Jane Nicklinson (who is continuing a case brought by her late husband, Tony) and Paul Lamb (right) who both suffer from incurable degenerative illnesses that have rendered them catastrophically disabled.

Both Tony Nicklinson and Paul Lamb, while in sound mind, expressed a desire to end their lives at a time of their choosing in order to end their suffering and die with dignity.

….The short answer must be, and always has been, that the law relating to assisting suicide cannot be changed by judicial decision. The repeated mantra that, if the law is to be changed, it must be changed by Parliament, does not demonstrate judicial abnegation of our responsibilities, but rather highlights fundamental constitutional principles.

The circumstances in which life may be deliberately ended before it has completed its natural course, and if so in what circumstances, and by whom, raises profoundly sensitive questions about the nature of our society, and its values and standards, on which passionate but contradictory opinions are held. Addressing these life and death issues in relation to life before birth, the circumstances in which a pregnancy may be terminated were decided by Parliament. The abolition of the death penalty following the conviction for murder was, similarly, decided by Parliament. For these purposes Parliament represents the conscience of the nation. Judges, however eminent, do not: our responsibility is to discover the relevant legal principles, and apply the law as we find it. We cannot suspend or dispense with primary legislation. (paras 154 – 155)

The Court also considered an appeal in the "Martin" case, brought by a man who wishes to end his life but needs the assistance of a third party. He argued that it should be lawful for a doctor or nurse to help him travel abroad to die with the help of a suicide organisation in Switzerland. In this case, the appellant was successful in seeking clearer guidance from the Director of Public Prosecutions (DPP) for carers or health professionals assisting those wishing to end their life.

Lord Dyson, the Master of the Rolls, and Lord Justice Elias, in their majority judgment concluded that it was not sufficient for the Policy merely to list the factors that the DPP will take into account when deciding whether to consent to prosecution (see para 138). The Policy should give some indication of the weight the DPP accords to the fact that the helper was acting in his or her capacity as a healthcare professional (see para 140).

They said it would be constitutionally improper for the DPP to guarantee immunity from prosecution in respect of any class of helpers (see para 142). Further, it would be impractical, if not impossible, for the DPP to lay down guidelines which would embrace every class 2 case but that it is not impossible or impractical to amend the Policy so as to make its application in relation to class 2 cases more foreseeable than it currently is (see para 144).