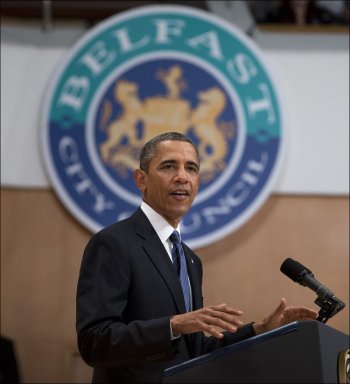 The US President, Barack Obama, has condemned 'faith schools' as 'divisive'' during a speech to an audience of young people and dignitaries ahead of the G8 summit in Northern Ireland.

He told the audience at Belfast's Waterfront Hall, mainly made up of pupils from secondary schools in the city, to "break down the barriers that still divide Catholic from Protestant in the city".

President Obama said: "If towns remain divided – if Catholics have their schools and buildings, and Protestants have theirs; if we can't see ourselves in one another and fear or resentment are allowed to harden - that too encourages division and discourages co-operation."

Following the speech President Obama and David Cameron visited an integrated primary school in Enniskillen where Protestant and Catholic pupils are taught together.

Archbishop Gerhard Müller, prefect of the Congregation of the Doctrine of the Faith, who was in Scotland to officially launch the St Andrews Foundation for Catholic teacher education at Glasgow University, said: "the Catholic school is vitally important … a critical component of the Church", adding that Catholic education provides young people with a wonderful opportunity to "grow up with Jesus".

"Unfortunately, lessons from Northern Ireland have not been learned. As Britain becomes a more diverse and multi-faith society, single faith schooling threatens to be hugely detrimental to building cohesive and integrated communities.

"There is a clear choice here between segregation and secularism. Unfortunately, our political leaders' unquestioning support of faith schools is taking us in precisely the wrong direction."

The National Secular Society has warned that a government review over its engagement with faith organisations in England appears "designed...