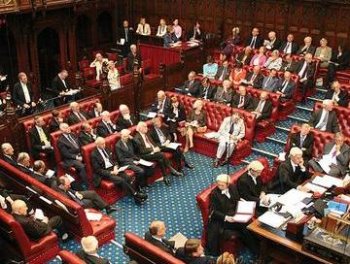 This week saw the end of three days' worth of debate in the House of Lords over the Marriage (Same Sex Couples) Bill whilst in its committee stage. The debate revealed a substantial number of wrecking amendments submitted by Lords, all largely a variation on just a few themes.

One of which was the insistence that we should distinguish between heterosexual marriage and homosexual marriage. There was an amendment, tabled by Former Conservative Party chairman, Lord Mawhinney, which called for a heterosexual marriage to be lawfully described as "traditional marriage"; another, by Lord Carey, said that "nothing in the Act can take away the right of a man and woman to enter a traditional marriage"; one of Lord Hylton's amendments called for the bill to leave out the word "marriage" and replace it with "union"; and a final one by Lord Armstrong sought to clarify that "lawful marriage between a man and a woman is matrimony". These amendments were either withdrawn or failed.

All the while, there have been complaints from the Coalition for Marriage. Speaking to Pink News, Coalition for Marriage spokesperson Dr Sharon James made the surprising statement that Liberal Judaism, the Unitarians and the Quakers have been given "a disproportionate amount of time" in the debate for equal marriage at the expense of "mainstream Christian people". Given the number of amendments, all grounded within a traditional Christian perspective, attempting to distinguish between heterosexual marriage and same-sex marriage by emphasising notions of 'tradition' and 'matrimony', Dr James's assertion could be understood as somewhat disingenuous.

During the Lords' debate, there was also concern expressed for teachers. Despite the Education Secretary, Michael Gove, dismissing the notion that teachers opposed to same-sex marriage would be in danger of losing their jobs, Lord Dear looked to entrench an amendment that stated no teacher should be required to endorse same-sex marriage if that teacher has a conscientious objection to it.

Last week, Equalities Minister, Maria Miller revealed that the government will be proposing that the Public Order Act 1986 be amended so as to explicitly protect critics of same-sex marriage. The Public Order Act includes a number of clauses prohibiting the provocation of hatred or violence, and Ms Miller's amendment seeks to clarify that criticism of same-sex marriage does not constitute such an offence; it states, that "any discussion or criticism of marriage which concerns the sex of the parties to marriage shall not be taken of itself to be threatening or intended to stir up hatred". This amendment is seen as an attempt to appease those equal marriage opponents who had previously voiced fears that the passing of the bill would lead to their being prosecuted.

According to the findings of an international poll conducted by Ipsos MORI and released today, 55% of people in the UK support equal marriage.

The Marriage (Same Sex Couples) Bill is due to go to report stage on the 8 July and have its third reading on the 15 July.