Government has a “duty” to provide Catholic Education, says Archbishop 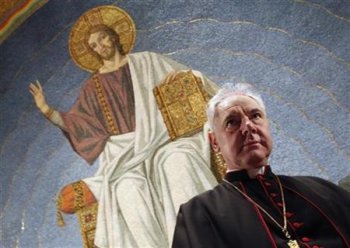 One of the Vatican's most senior clerics has used a visit to Scotland to reinforce the message that the provision of faith schools by the state is a fundamental right of Catholic families.

Archbishop Gerhard Müller, the Prefect of the Congregation for the Doctrine of the Faith, made the statement at during a lecture at Glasgow University last week. He also drew attention to the "voices raised against" Catholic education.

The visit is seen as an indication of the Vatican's interest of the health of the Catholic Church in Scotland, which has been through one of the biggest crises in its history. It also comes just a week after Secular Scotland lodged a petition with the Scottish parliament asking for the law to be changed so that RE and religious observance in state schools are opt-in rather than opt-out.

Archbishop Müller will tell the audience: "For many decades, there have been voices raised against the idea of Catholic education, against the fact of distinct faith schools and increasingly, in today's society, there are great challenges to the very idea of a religious education."

Archbishop Müller accepted there were voices within the Church itself which questioned the need for separate Catholic education. But he added: "The State has the duty and responsibility to facilitate the wishes of Catholic parents to educate their children according to their desire to pass on their faith to their children."

Terry Sanderson, president of the National Secular Society, said: "The Cardinal is obviously advocating for his own interests and those of his Church, but although most Human Rights charters guarantee parents the right to raise their children according to their own religion, no charter says that the state has a 'duty' or 'responsibility' to do the job for them or to use taxpayers' money to 'facilitate' it."