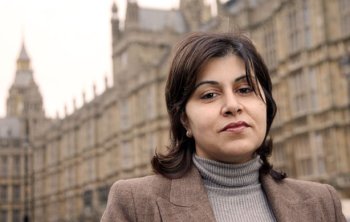 The reported refusal of Baroness Warsi, the "Minister for Faith and Communities" to steer the flagship same-sex marriage bill through the House of Lords was condemned today by the National Secular Society.

The Same-Sex Marriage Bill will reach the House of Lords on Monday, where a bitter and protracted debate is expected. Over 75 peers have put their names down to speak and many are determined to introduce amendments that they hope will wreck the legislation.

Terry Sanderson, president of the National Secular Society, said: "Lady Warsi's title of Minister for Faith and Communities seems something of a misnomer. She appears uninterested in the interests of communities – or at least one particular community - and focuses entirely on faith.

"It is simply not acceptable for a minister to allow their religion to dictate their political actions when it is to the detriment of a minority whose rights she has been charged to protect.

"If she is asked by the Prime Minister to represent the Government she should do so. Lady Warsi is unfit for the job she has been given and should be replaced by someone with a more balanced approach. The Prime Minister should, at the same time, take the opportunity to abolish the role of "minister for faith" which is just asking to be abused by people whose personal enthusiasm for religion clouds her judgment on other areas of her brief."

Mr Sanderson said that when it was revealed that Ruth Kelly, a former Minister in the Tony Blair Government, was a member of Opus Dei and repeatedly refused to support Government policy on equality – even though she was Equalities Minister – when it contradicted her religion, her position was challenged and she eventually left politics.

"Lady Warsi is now doing the same thing and putting her religion before Government policy and the interests of gay people.

"Although this is a free vote, and other ministers will be voting against the Bill, it seems extraordinary that the minister who is supposed to be championing the rights of gay people should now be doing her best to thwart them."