Majority of Europeans favour separation of church and state, but Islam has an uphill battle for acceptance in Germany 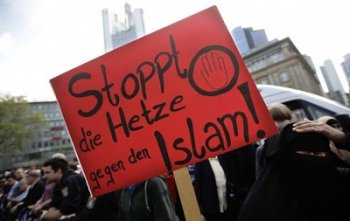 A major new study of attitudes towards religion around the world has been conducted by the Bertelsmann Foundation – and finds that the majority of people in all the 13 nations surveyed favour a clear separation between religion and the state.

The results of the survey, conducted among 14,000 people are being released over a period of time. The latest results relate to Germany and show that although Germans are generally open to other religions, many are still suspicious of Islam.

Indeed, half of Germans don't believe that Islam fits into the Western world.

85 percent of Germans agreed or tended to agree that one should be open towards all religions. They saw most religions as an enrichment, especially Christianity, also Judaism and Buddhism, but a majority of 51 percent saw Islam as a threat.

The opinion seeing Islam as a particular threat was shared in many western states, including 60 percent of Spaniards, 50 percent of the Swiss and 42 percent of US citizens. In contrast, in India, only 30 percent see Islam as a threat, and in South Korea, it's just 16 percent.

Detlef Pollack, the sociologist who co-authored the study, says that this negative perception could be due to the lack of personal contact between Christians and Muslims. More people in eastern Germany see Islam as threatening than in the West, even though the east is home to only two percent of all the country's Muslims.

But Pollack also notes that people have even less contact with Judaism, Buddhism and Hinduism, all of which are seen more positively than Islam, and he argues that the media have a lot to do with that: "The picture the media give of Buddhism or Hinduism is that of peace-loving religions," Pollack told Deutsche Welle. "Their picture of Islam is more about fanaticism and aggression."

The chairman of the Central Council of Muslims in Germany, Aiman Mazyek, also blames the media for much misperception, although he also said: "The Muslims have to roll up their sleeves, get more involved in society and make it clear that they are committed to this country."

Germany has between 3.8 and 4.3 million Muslims, making up some 5 percent of the total 82 million population, according to government-commissioned studies.

An earlier study in 2010 by the University of Munster found that 66 percent of western Germans and 74 percent of eastern Germans had a negative attitude towards Muslims. A more recent study from the Allensbach Institute suggested that this had not changed over the past two years.

Asking Germans about Islam, only 22 percent said they agreed with Germany's former president Christian Wulff's statement that Islam, like Christianity, was part of Germany.

According to a 2010 nationwide poll by the research institute Infratest-dimap, more than one third of the respondents would prefer "a Germany without Islam."