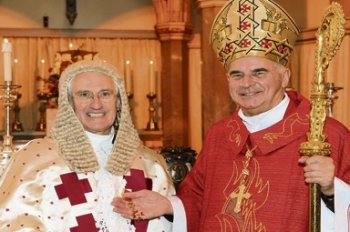 The National Secular Society has written to Kenny MacAskill MSP, the Scottish Government's Cabinet Secretary for Justice to draw his attention to a possible undermining of the impartiality, integrity and independence of the Scottish judiciary.

The NSS complaint relates to two ceremonies, the Red Mass (Catholic) and the 'Kirking of the Court' (Protestant). At the ceremonies, which are attended by all levels of the judiciary in Scotland, judges are invited to request 'guidance from the Holy Spirit' for all who seek justice.

In a letter to the Scottish government, the NSS warn that the ceremonies also provide the religious hierarchies involved with an opportunity to assert the influence and primacy of Christian ethics and dogma in the judicial process.

The ceremonies are specifically timed as markers for the start of the legal year so as to be synonymous with it, and the NSS have warned that judges' attendance at these ceremonies may undermine the principles set out in the Statement of Principles of Judicial Ethics for the Scottish Judiciary (PDF).

The Principles contain express provisions forbidding judges to engage in political meetings, affiliations or activity which the NSS says raises questions over participation in Red Mass and Kirking ceremonies hosted by religious organisations with overt political agendas.

Both the Scottish Catholic Church and the Church of Scotland have actively campaigned against the Scottish Government's plans to legislate for same-sex marriage.

Mr McBay said: "Members of the judiciary who attend the Ceremonies could cause the public to associate them with, or create the perception of partiality towards, either denomination and their very public and partisan political campaigns.

"There are many people in Scotland with no adherence to any religious belief, and who reject the notion that guidance as to judicial procedure and decisions should be the subject of appeal to, or intervention by, supernatural agency. The judicial system should be neutral with regard to matters of religious belief, neither favouring one faith over another or none at all, nor being perceived to be so doing.

"We have stressed in the strongest possible terms in our complaint that Judges can of course be religious and attend any services they wish in a personal capacity, but we believe the judges who voluntarily take part in these 'traditions' are acting contrary to their obligation to remain independent and impartial, and be seen to be so".

In the letter to the Kenny MacAskill, the NSS also expressed surprise that — given the concerted attempts to tackle sectarianism — that neither the Lord President of the Scottish Judiciary nor the Scottish Government appear to see any problem in these two rival Christian denominations, on which the curse of sectarianism is founded, laying claim in their respective Ceremonies to the execution of Scottish justice in accordance with their conflicting theological perspectives.

Mr McBay added: "If the principles contained in the Statement are to be upheld both to the letter and in spirit, then the perception of the judiciary's impartiality and independence has to be maintained. We believe that attendance by the Judiciary at the Ceremonies undermines the integrity of the Statement, and weakens public trust in what should be a scrupulously neutral public institution."

(Picture: Cardinal Keith O'Brien presents Scotland's top judge, Lord Gill, with a papal medal at the 2012 Red Mass ceremony, at which the Cardinal urged Catholic lawyers to 'remain strong and true to their religious beliefs')