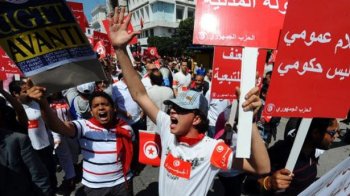 The American organisation Human Rights First has issued a new report (pdf) that details steps the United States and Tunisian governments should take to protect freedom of expression to support Tunisia's peaceful transition to democracy.

The organisation notes that the example of Tunisia, the birthplace of the Arab Spring, will set an important precedent for democratic transitions throughout the Arab World. Progress towards securing basic rights and freedoms through a peaceful democratic process in Tunisia will signal that such progress is achievable in a majority Muslim, Arab country.

"Whether and how blasphemy and other speech deemed offensive to religion or religious symbols is regulated in Tunisian law is a contentious issue in the transition process," noted Human Rights First's Neil Hicks. "Rights and freedoms would be threatened by any broadening or strengthening of laws criminalizing allegedly blasphemous or offensive speech, and several such proposals have been made since the revolution that ousted former President Ben Ali."

Human Rights First notes that blasphemy laws empower elements of society to restrict debate and dissent on religion, provide a pretext for governments to silence their opponents, and fuel violence by empowering extremists.

Tunisia suffered from such violence in September 2012, when two people were killed and 29 others wounded outside the U.S. Embassy during a protest against the video, The Innocence of Muslims.

Human Rights First's report calls attention to several disturbing incidents of blasphemy related violence, most notably the attack on the American Embassy and the destruction of the American School on 14 September 2012, which led to the evacuation of all non-essential staff from the embassy.

Political violence is seen as the biggest threat to Tunisia's transition by many of the civil society activists and political leaders with whom Human Rights First met in Tunisia. These shocking events inflicted great damage on Tunisia's transition and should serve as a reminder of the unique potential of allegations of blasphemy to trigger conflict and instability.

Human Rights First notes that in recent months, the Tunisian National Constituent Assembly has made the welcome decision to remove from the draft constitution proposals that would have criminalized "attacks on that which is sacred."

Despite this positive development, risks remain that existing laws or newly introduced legislation could be used to increase the use of accusations of blasphemy to stifle peaceful dissent and to polarise Tunisia society along a secular versus religious axis. The report urges the Tunisian government to take steps to strengthen legal protections for freedom of expression and to hold accountable those who engage in violence to protest alleged insults against religion.

The report also accuses the U.S. government of a lack of urgency in its support for the promising and important political developments underway in Tunisia. It calls on the U.S. government to renew and reinvigorate its commitment to promoting peaceful democratic transition in Tunisia, and to stress the need for the Tunisian authorities to implement strong safeguards for freedom of expression to improve prospects for the transition to succeed. Human Rights First recommends that the United States government:

See also: When it's on the receiving end, the Catholic Church is suddenly against blasphemy laws