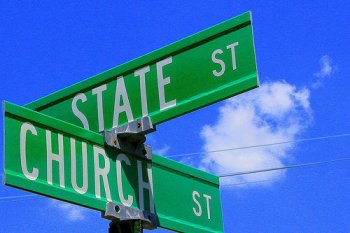 The US Supreme Court is to consider whether prayers can be offered as part of government meetings.

The case is being brought by two residents of Greece, New York, who say they feel marginalized by the Christian prayers that open every town board meeting.

The two women – Susan Galloway and Linda Stephens – are being represented by Americans United for Separation of Church and State, a religious liberty watchdog that has long opposed the practice of inviting clergy to open meetings with sectarian prayers.

Town officials claim members of all faiths and atheists are welcome to give the opening prayer, but official records show that two-thirds of the prayers delivered between 1999 and June 2010 contained references to "Jesus Christ", "Your Son", "the Holy Spirit" or "Jesus".

Rev. Barry W. Lynn, executive director of Americans United, said: "A town council meeting isn't a church service, and it shouldn't seem like one. The Government can't serve everyone in the community when it endorses one faith over others. That sends the clear message that some are second-class citizens based on what they believe about religion."

American's United Legal Director Ayesha N. Khan, who is expected to argue the case before the Supreme Court this autumn, commented: "Legislative bodies should focus on serving the community and stay out of the business of promoting religion."

After a similar challenge by the National Secular Society in 2011, the High Court in London ruled that prayers as part of formal meetings of a Council were unlawful.

Following the ruling, Communities Secretary Eric Pickles said that the Localism Act, which came into effect after the ruling, enabled councils to continue to include prayers as part of their formal business. However, his claims, which have been questioned by legal professionals, have yet to be tested in court.

It is thought that around half of UK councils known to be opening meetings with prayers before the ruling, have now ended the practice.