Scots are abandoning their religion 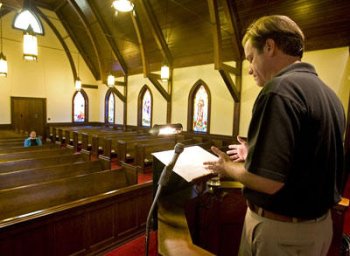 Scotland, once one of the more pious parts of the British Isles, is rapidly becoming secularised according to a poll commissioned for the Sunday Times and Real Radio Scotland.

Over the past decade the number of Scots saying they belong to a Christian faith has fallen from almost two-thirds (65%), as recorded in the 2001 census, to 55% today.

Over the same period, the number of those who follow no religion has risen from 28% to 39%.

While 70% of men aged 55 and over, and 78% of women in the same group, call themselves Christian in the poll, only 34% of men aged 18–34 and 33% of women of this age do so. This is the first time we have seen that women have been shown to be less religious than men, and may be the first signs of the emergence of an important trend.

These trends are expected to be echoed in the results of the 2011 census to be published later this year.

The drop in support for the Church of Scotland, once regarded as the national church, is particularly acute. While 42% said they belonged to the kirk in the 2001 census, only 32% do so in the latest survey of 1,002 Scottish adults.

Whereas those describing themselves as Roman Catholic in 2001 stood at 16%, the poll found 13% doing so now, a smaller proportionate drop than the Church of Scotland.

The poll found that only 8% of the Scottish population attend church once a week, compared with a finding of 14% by the Scottish social attitudes survey in 1999.

Less than a third (30%) have been to church within the past year except for special ceremonies such as weddings and christenings, while just over a third (34%) say it has been more than a year since they attended and a further 31% "never or practically never" go.

The poll shows that there would be widespread support for the new pope to make some radical changes to the Catholic Church.

Even among Christians, there is a lack of faith in the Bible. Of those who belong to the Church of Scotland, only 37% say they believe Jesus was God's son and came back to life after being crucified, while 23% consider the account false and 35% say they don't know. The Easter story is more widely believed among Catholics (67%) and other Christians (61%).

Terry Sanderson, president of the National Secular Society, said: "These figures indicate a growing national trend towards secularisation. And even then the results of the Scottish poll are likely to be underestimates of the extent of it. When the Scottish census figures are released later this year, we expect to see similar levels of decline in religious identity."

Mr Sanderson referred to the well-established phenomenon of people overstating their religious beliefs and loyalties; a recent poll in England showed implied attendance double the actual figures taken from church statistics. He also pointed to the response to another poll conducted on behalf of the Chef and Brewer pub chain about how people spent their Sundays. Fifteen per cent claimed that they 'usually went to a place of worship'. Terry Sanderson said: "Even the churches wouldn't try to claim that. Their own head counts show less than half of that number actually show up at church on a normal Sunday.

He continues to be puzzled by the way people still often felt the need to exaggerate their religious adherence when questioned by pollsters. "So why do people feel the need to say they go to church when they don't? It seems to be another indication of the religious indoctrination we have all undergone, which leaves many of us still feeling guilty about admitting we couldn't really care less about the church and are bored by it."