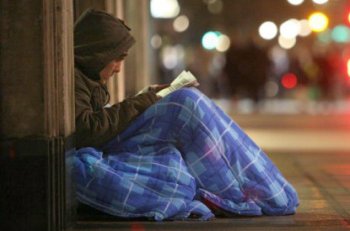 A new report, funded by a number of religious groups and researched and published by Lemos and Crane, recommends that agencies working with homeless people should encourage their clients to go to church and to talk about "faith."

The report, Lost and Found: faith and spirituality in the lives of homeless people is written by Carwyn Gravell and says that homeless people, whether they are being helped by secular or religious organisations, should be told that "religious belief and spiritual practice can help them come to terms with a past characterised by profound loss, enhance the present where time can hang heavy, and create a meaningful future built on hope, fellowship and purpose."

The publishers of the report say: "Britain is commonly described as a secular society. Open expression of faith in public and professional life is largely frowned upon. Yet religion continues to give many people in their private lives significant psychological, social and emotional benefits."

They say that agencies for the homeless hardly ever raise the topic of religion with their clients let alone encourage them to attend a place of worship. "Why this silence on such a powerful source of personal strength and support?" they ask.

The Lemos and Crane website says: "Lost and Found describes the ideological dominance of secular orthodoxy and scientific materialism in mainstream service provision for homeless people and how religion is regarded by many in the sector, including senior commissioners, with atheist views as a subject to be avoided – too personal and intrusive for the client, too time-consuming and difficult to handle for the support worker, and coming with the risk of being misunderstood as an attempt to proselytise."

The publishers, who received funding from the Catholic Archdiocese of Westminster among other religious bodies says the report will be read by hundreds of providers and commissioners on how faith and spirituality should be integrated into the care offered to the homeless. They recommend:

Terry Sanderson, President of the National Secular Society, said: "This reads very much like another step towards 'faith-based welfare'. It all sounds very benign at first sight, but once religion-based care becomes established it rapidly turns from being neutral into being a platform for evangelising. This report tries to convince us that it is not in the business of encouraging proselytising among the homeless and vulnerable, but you don't have to read too far between the lines to see that is exactly what it is about."

Mr Sanderson said that if people have spiritual and religious needs, there are tens of thousands of churches that they can go to of their own free will – they don't have to be directed into them by people they are looking to for welfare services. "When people are dependent on an organisation for a roof over their head, invitation can quickly begin to feel like coercion."