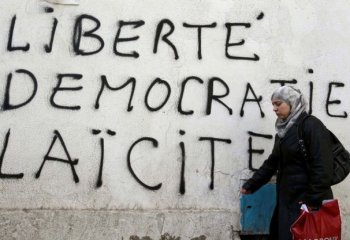 The French Government is at increasing odds with aggressive religious lobbies – particularly the Catholic Church – which are determined to undermine the nation's constitutional secularism.

The Hollande administration is moving ahead with a promise to loosen limits that control embryonic stem cell research, despite heavy pressure from the Catholic bishops. The Government is also fighting a rearguard action against the Church over same-sex marriage proposals.

Muslim activists are also becoming restive over the laws governing veils after the constitutional court ruled that a woman was unfairly fired from a job at a private crèche for refusing to remove a headscarf.

Cardinal Andre Vingt-Trois, head of the Catholic bishops conference is leading the protests against the loosening of restrictions on stem cell research. The French law, passed in 2011, only passed after restrictions demanded by the Church were introduced. These included allowing research only on imported embryos not used for in vitro fertilisation in other countries.

The National Assembly and Senate have scheduled abbreviated debates on the changes in order to rush them through, the Archbishop said.

In another dispute over same-sex marriage, the Church has been instrumental in organising large-scale marches in Paris to oppose the plans. Another is planned for May.

Nevertheless, the Senate has this week approved the legislation. All that is required now is that the Senate approve the enabling legislation – which seems certain – and same-sex marriage will be legal in France.

Some Muslims are alarmed by a new legislative proposal extending the ban on headscarves from the public to the private sector where state subsidies are made and where in some areas they replace public services. A survey showed that 84% of those polled supported the tighter rules.

In a televised interview last week, President Francois Hollande appealed to the activists to respect the will of parliament as protesters stood outside the broadcasting centre demanding the withdrawal of the same-sex marriage law.