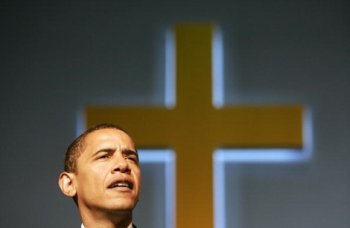 The Secular Coalition for America today expressed disappointment that on Friday President Barack Obama issued an executive order extending the Faith-Based Advisory Council without addressing employment discrimination among many of the faith-based organisations that receive federal funding through the programme.

On the campaign trail in 2008, President Obama promised to abide by "a few basic principles" that would protect the constitutional separation of church and state in his plan for an expanded faith based initiative programme. He said, "First, if you get a federal grant, you can't use that grant money to proselytize to the people you help and you can't discriminate against them – or against the people you hire – on the basis of their religion. Second, federal dollars that go directly to churches, temples, and mosques can only be used on secular programs."

"It's a huge disappointment that five years later nothing has been done to address this problem," said Edwina Rogers, executive director of the Secular Coalition for America. "It is unacceptable that religious institutions accepting taxpayer dollars are permitted to discriminate based on religious preferences with the federal funds."

The Secular Coalition has called for reform and oversight of the Office of Faith Based and Neighborhood Partnerships and the agencies that it oversees for years. Government reports and hearings have documented the constitutional problems and gross abuses rampant in this programme, yet many of these organizations continue to receive federal funds used for religious discrimination in hiring, while reforms to prohibit proselytizing in these purportedly secular social service programs have been weak.

In April of 2012, the Obama administration published new guidelines for organizations receiving federal funds to provide services through faith-based initiatives. In the 50-page report, the Administration detailed how organizations must separate their religious mission from their community service mission. However, the report contained little significant change to the church-government partnerships initiated by President George W. Bush that provide direct taxpayer funding to religious institutions.

Rogerssaid it's time for the President to make good on his failed campaign promise.

"It seems President Obama was all bark and no bite when it comes to reforming the faith based initiative,"Rogerssaid. "The Administration's decision to allow this discrimination prioritizes the concerns of religious organizations over the people these programs are intended to serve."

A change in the rules governing faith-based initiatives would not require Congressional participation and could be done via executive order by the President.