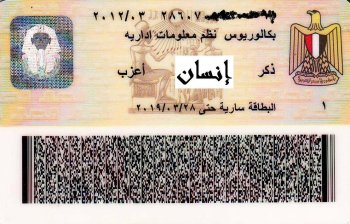 In an attempt to disentangle religion and citizenship, activists in Egypt are encouraging citizens to remove their religious affiliation from their national identity cards.

The "None of Your Business" campaign is being driven by a Facebook group and a YouTube video and follows in the wake of recent violence against Coptic Christians in the country.

Organisers say the removal of religion from official documents — the most important of which is the personal ID card — is a small but important step towards ending discrimination on the basis of religion. The group's Facebook page describes the initiative as "a campaign against interference in citizens' private lives by the state".

The campaign's video was produced by Aalam Wassef, an artist, musician and blogger who made subversive online videos during the Mubarak era under the pseudonym Ahmad Sherif.

Mr Wassef told the New York Times Lede Blog: "Under Muslim Brotherhood rule, stating that your religion is your own business is a radical form of re-appropriation at a time when Islamists are posing as the sole gatekeepers of what it is to be a 'good Muslim', 'a good Christian' etc. Taking the liberty of masking your religion is, de facto, a way of challenging this imposture and discarding the threat of being called an infidel."

Many in the country recognise the importance of secularism in ensuring national unity between Coptic Christians and Muslims.

When taking office as Egypt's new president in June 2012, Mohammed Morsi pledged to follow a pluralist policy that respected the rights of women and non-Muslim minorities. However, Human Rights Watch has warned of growing religious intolerance and sectarian violence against Coptic Christians in Egypt in recent years and the rise to power of the Muslim Brotherhood has alarmed many of the country's Coptic Christians who make up 10% of Egypt's 82 million population.

There has been a proliferation of prosecutions for blasphemy in Egypt in the nearly two years since Hosni Mubarak was overthrown. Critics say defamation and blasphemy laws are being used by the Government to stifle dissent and limit the freedoms of religion and expression. Many of those targeted have been Copts. Last year a court sentenced Alber Saber, an atheist blogger from a Coptic Christian family, to three years in prison for blasphemy and contempt of religion.