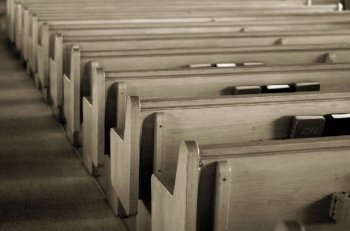 The Sunday Times commissioned a new YouGov poll (pdf) among 1,918 Britons to find out what they think about religion, which was published last week.

When asked whether they believed in God, 51% or those questioned said they did not, 38% said they did (disproportionately women 44%, against 32% of men), Strangely, only 77% of Christians believe in God including 86% of Catholics. 11% are uncertain what to think.

In answer to the question "how important, if at all, would you say religion is to your own life?" The majority (66%) admits that religion is not important, rising to 71% in the 40–59 years age group.

Apart from the rites of passage, 55% say they never go to a place of worship. 7% claim to attend a place of worship on a weekly basis and a further 6% at least monthly. 29% say they go less frequently and, the latter figure being highest in Scotland (61%) and the Midlands and Wales (60%) and lowest for Christians (19%, particularly Catholics on 13%). The National Secular Society has suggested that these particular figures should be taken with a pinch of salt. It is well known amongst statisticians that respondents often overstate their religiosity. This trend is well demonstrated again here, as based on the respondents' answers, just under 12% of the population attend church – almost twice the actual percentage based on official church attendance figures.

54% have a great deal or fair amount of trust in priests, vicars, and other clergy to tell the truth, rising to 73% among Christians, with 40% having little or no trust in them. Clergy are the sixth equal most trusted profession on a list of eighteen occupations, the range being from 83% for family doctors to 13% for estate agents.

Still more, 69%, feel that the Church of England is out of touch. Even 53% of Christians take this line. Just 21% of all adults view the Church as being in touch. 10% have no opinion on the subject.

78% feel that the Church of England should allow women bishops, including 89% of Liberal Democrats, 85% of Anglicans, 83% of Conservatives, 82% of women and Scots. Opponents of women bishops number 9% overall but 19% of Catholics, 15% of UKIP supporters, and 13% of Londoners. 13% do not know what to think.

Only 28% correctly identify Rowan Williams as the previous Archbishop of Canterbury, the best score — apart from Anglicans (and they only on 38%) — being recorded by Conservatives (35%). Ignorance is especially marked in Scotland(82%). Fewer (19%) can identify Justin Welby as the new Archbishop of Canterbury, leaving 81% unable to do so, including 71% of his own flock.