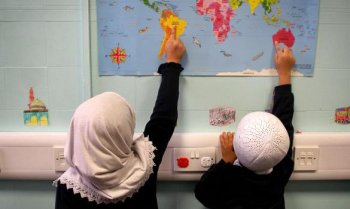 Plans to open a Muslim free school in Halifax, West Yorkshire in September have been put on hold after allegations of links with extremism.

The Northern Lights Free School is being investigated by the Department for Education's Diligence and Counter Extremism Division, whose remit is to protect children and young people from exposure to extremist views in schools.

A DfE spokesman said proposals for the school would not go any further until their inquiry into allegations of religious extremism had concluded.

In a letter to local MP Linda Riordan, Schools Minister Lord Nash wrote: "If these allegations are substantiated, we will not hesitate to take appropriate action. You are right that no decision has yet been taken to allow the Northern Lights Free School to open, and we will not take the project further until we have completed our investigation."

Concerns initially stemmed from a leaflet sent out in November to parents by the Sunniyy School, a community partner of Northern Lights, which included extreme religious views which have since been disowned.

In a statement, the proposed free school said: "The Northern Lights Educational Trust is not aware of any such investigations other than the due diligence checks that need to be completed into all free school applications. The Trust has a good working relationship with diverse members of the community and with the Prevent Policing Group (which tackles extremism) and looks forward to strengthening all working partnerships."

The Yorkshire Post reports that if the school were to get the go-ahead it would open in September. Northern Lights ultimately hopes to cater for 210 children but a phased opening for 120 Reception to Year 3 children is initially planned.

"A job advert on Northern Lights' website says it is not a faith-designated school, but has a "Sunniyy Islamic Ethos." It says the ethos "is our guiding set of values and principles... expressed as a set of common shared values that are rooted in Islam."

The Yorkshire Post also reported that Calderdale Council, too, has raised concerns with DfE about a leaflet sent out by the Suniyy school and its encouragement of a hard line religious ethos, including a rise in Muslim pupils withdrawn from mainstream activities.

The Sunniyy School leaflet promoted a meeting of parents by stating: "If it was said to us 'If you do not attend this meeting your child will die' I am certain we would all make sure that we attend the meeting." It added: "There have been several incidents recently where children in various settings have been forced to do things against Islam."

The Sunniyy School denied the leaflet and meeting were connected to rallying parental support for Northern Lights.

Northern Lights has previously stated the leaflet was not "issued, endorsed or supported" by them.

But a letter from David Whalley, Calderdale Council's head of learning, sent on March 28 to the DfE, said: "A number of schools in the area of Park Ward have contacted the local authority voicing their concerns about pressure being applied to families to enrol children at the proposed school and raising other community cohesion concerns.

"Following the leaflet that was sent out to parents in the community... I had follow up conversations with headteachers, community officers and the Chair of the Northern Lights Trust. It was agreed that the tone of the communication is wholly inappropriate and this was acknowledged by the Chair who stated that the Sunniyy School is a community partner but has no formal links with the proposed free school. A letter acknowledging the inappropriate nature of the communication has since been issued by the Sunniyy School."

"The local authority is led to believe that there are close links between the Sunniyy School and the proposed free school and therefore the potential risk of a negative impact on community relations within the area is high."

Mr Whalley's letter said this concern had been corroborated by West Yorkshire Police, with officers from the PREVENT team looking into allegations surrounding both the Sunniyy School and the proposed free school. It added... that police "have confirmed to the local authority that it is their view that the two organisations are inextricably linked and that a potential negative impact on the local community could result from the creation of the free school in question."

Terry Sanderson, president of the National Secular Society, said: "It is good to see the Government's Education's Diligence and Counter Extremism Division is not just a PR exercise and that sponsors for free schools are being monitored. But we fear that some highly questionable religious groups are seeing an opportunity to spread their influence at the taxpayers' expense through free schools. We wonder if the monitoring is rigorous enough to screen out all potentially extremist groups."